The fee varies depending on the type of Eudaemon Item traded in small increasing intervals of gil. 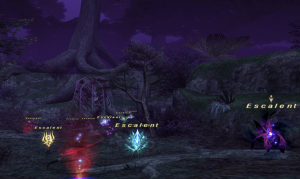 The Yorica Skirmish has two distinct aspects to its operation. Players must control a base known as the Marchland and use it to spawn NPCs to defend and ultimately destroy the enemy Stronghold.
One person is typically tasked with operating the Ars Monstrum book whilst other players spread out and kill Escalent (Twitheryms/Elementals/Fluturinis) to provide Puissance for the person operating the book (the Booker). The Booker will use this Puissance to summon NPCs prefixed with Valiant to fight back the Strongholds' own Malicious enemies. Once the player has overwhelmed the Stronghold, it will be required that player make a final attack to defeat the Stronghold and advance to the next level. If the Marchland is overwhelmed the players are immediately kicked out of the Skirmish without any rewards, including any items in the treasure pool.

The following 8 pages are in this category, out of 8 total.