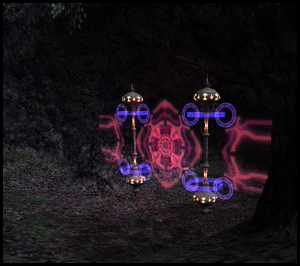 The objective of this assault is to collect negative status effects. Once you have obtained a negative effect, talk to the NPC Soulflayer Garjham at (H-8) to register the status effect.

Bringing along jobs that can charm is a good idea for lower level jobs. Leeches, lizards, spiders, and raptors can all be charmed, and all of the status effects except Bio and Amnesia can be caught by standing in cone range when the enemy uses it on a pet.

Spiders and Poroggos are the easiest to gain two of the three ailments from with the last being up to the player. Raptors also count for two with Slow and Disease. Leeches rarely use Acid Mist.

Unlike most Assault missions, this one is significantly harder at level 99. It's recommended to use level cap 70 on a party of a tank, healer, and damage. It's also possible to win as DNC at 70 cap, but you'll have difficulties on Mamool Ja or links. Bring Reraise Earrings. Raptor and Leech can provide the three status effects you need while being close to the NPC, but Leech rarely uses Acid Mist. There's no guarantee of success.

If you must stay level 99, bring a job or subjob that can heal (DNC subjob works on just about everything) and a 1 damage weapon such as a Signet Staff. Damage your target down to about 10-20%, then tap it with your 1 damage weapon until it gives you the status effect. However, you'll still run into the issue of resisting them more often than not.