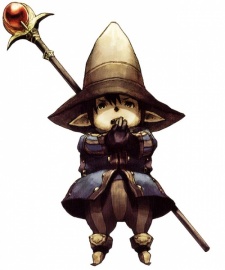 This isn't a complete in-depth guide but a general idea on the direction you should go.

Pretty much blow $#!+ up! In event and party situations you'll be doing a ton of damage from Magic Bursts.

Will be your primary sub job

Could also be your primary sub. It's really up to you. 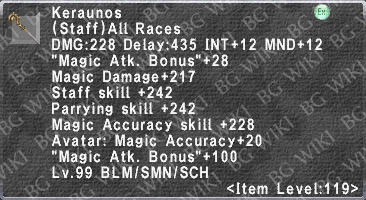 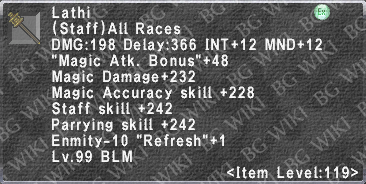 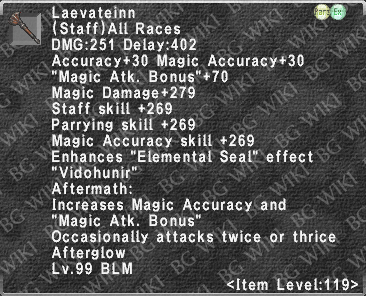 These are Common Gearsets, don't take these as gospel. I just threw these together as an idea on what to look for when filling in slots. It's hard to decide on what to do when you are a new 99 and want to get up to par. If this is your 1st 99 then do RoE-Intermediate right away! If not then, hop into Ambuscade and grab a set of Jahkri Garb. This set doesn't have any MP on it but provides amazing stats and is a great starter set. Frimosi Earring is easy to get from WKR and the Barkarole Earring is easy to get from a short series of Adoulin quests. With these sets I tried to make the gear more relevant to current content with easily obtained items avoiding places like Meeble Burrows (because who does that crap anymore) and the gear from there will just be replaced quickly anyway.

For Free Nuking, 2 stats to focus on initially are Magic Attack Bonus and Magic Accuracy.

Lot of Skirmish Gear. Mostly as a hold over until you can get the Jhakri Garb from Ambuscade. Oneiros Sash is from Dynamis - San d'Oria and can be done as a fresh 99 or level 90+ without much problem. For earrings don't get too worried about getting old stuff like the Novio. The Friomisi and Barkarole are easily obtained once you hit 99. Just look for something with MAB or +INT to hold you over. Some examples of place holders are: Molavite (a classic), Goetia (From Abyssea), Hecate's and Strophadic. Saevis Pendant is from Walk of Echoes and can be found on the AH sometimes. If not don't worry about it. Alternatives are: Genesis Locket, Stoicheion Medal, Atzintli Necklace, Quanpur Necklace. But really you should be trying to get Mizukage-No-Kubikazari from HTMB Warrior's Path. You can get this after hitting 99 and there is usually not a problem getting people to do this one since there are so many great drops from this fight.

Magic Burst Damage caps at 40%. While the gear can get you most of the way the gap is filled in by JPs (Capping @20 MBD from JP) as you get more from JP you can switch out gear to focus on MBD II. MBD II provides MBD past the 40% cap. So when you cap MBD on JP you'll only need 20% from gear. From there, getting MBD II gear is going to be the goal.