This Topics will introduce a new large-scale battle system to be introduced in the upcoming Wings of the Goddess expansion pack, the "Allied Campaign."

The Treasures of Aht Urhgan expansion saw the birth of Besieged, allowing players for the first time to enjoy battle of a massively cooperative nature. On an even larger scale, the Conquest system has been available for all players to participate in from the very beginning of FINAL FANTASY XI service.

Continuing in this vein, the development team has been racking their brains for a new system to further intrigue the adventuring population of Vana'diel. The result? An endeavor that can be engaged in simultaneously by numbers exceeding those of Besieged, while at the same time allowing for individual actions to have concrete, observable repercussions in the world of Vana'diel, and plenty of good old-fashioned battle and strategy! Set on the stage of the Crystal War itself, this is the Allied Campaign.

The overall campaign system is organized into four subdivisions: Campaign battles, Campaign Ops, headhunting, and tactical assessment. Following is an in-depth description of each of these.

The regions in question contain areas which are continually being plagued by sporadic outbursts of hostility along perpetually contested borders. Should the incessantly encroaching beasthordes be unequivocally repelled, the lands in dispute will be claimed as territories under Altana. There are several benefits to be reaped once claim is laid to an area, such as an increase in the number of Campaign Ops available, and the number of such benefits will grow in proportion to the amount of land secured.

Moreover, by having "Allied Tags" issued to you by an area's Campaign Arbiter, you may choose to have your campaign battle performance assessed. By doing so you may receive rewards for your service, such as Campaign-specific points, known as "Allied Notes," or even experience points. It is worth noting that experience points will not be lost in the eventthat a player should die while participating in Campaign.

In order to turn the tide of the war in their favor, each nation is conducting a series of campaign operations. Much like the campaign battles, the successful completion of these operations will result in rewards of Allied Notes and experience points. Accepting a Campaign Ops offer will require the player to use a certain number of their "Op Credits," granted automatically to all campaign participants once a day. However, this will apply only to the player taking on the charge. Other players in the party may participate in an operation without having to use their own Op Credits, and may still receive evaluations or experience points*.

Campaign Ops are unique in that they differ depending on the "medals" of the PC undertaking them, as well as other factors. A myriad of operations and settings are available, including varying levels of difficulty, solo-play specific settings, short-time operations, non-combative operations, and more.

In every area, players may run into free-spirit NPCs with ties to no nation. Such NPCs are known as "freelances." On such encounters you may be able to recruit these characters, enlisting them to temporarily serve the efforts of the Allied Forces. Freelances recruited in such a manner will not only participate directly in combat, but will also come to have an influence on the armies and countries which they serve under, and may even form their own ranks to lead in battle.

During the Crystal War, all nations regularly carried out polls on the military policy of the day. The information gathered was used to discern various points of contention among military leaders and strategists, such as geographic locations for spearheading offensives, battle tactics for engaging specific enemies, etc. The results of these assessments would be tallied on a weekly basis, with the prevalent opinions and views being implemented in the following week's military planning for campaign battles and Campaign Ops.

It is by no means overstating the case to say that the individual efforts of adventurers in Campaign will have a direct impact on the world around them, as well as the potential to sway its future. What role will your hand come to play in carving out the path of Vana'diel's destiny? 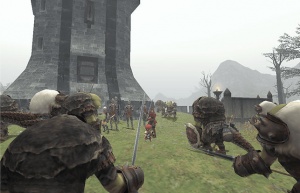 Orcish Empire storming a guard tower in Ronfaure
Campaign is broken up into four separate events. First, is Campaign Battle. This is when a target area randomly erupts into conflict. Previous screenshots have depicted this event, (such as the Orcs battling in Ronfuare). Basically, you participate in a fight similar to Garrison, but are restricted to a certain area of space like in Besieged.

As for the system governing all of this, instead of Signet or Sanction, there will be a completely new magic cast upon you, which eliminates experience loss upon death. Like Besieged, you can participate as you please from start to finish. Your activity in battle will determine what rewards you receive. It’s perfect for casual users and beginners to jump in and play.

Campaign Battles will spring up unexpectedly in various regions. As information comes in, you will learn about the particular area that is under attack. The ultimate objective is to control the area in question by forcing out the Beastmen. There are a number of benefits to this, most notably being Experience Points and earning Alliance Points (連合軍戦績 lit. Allied Forces Military Acheivement Score.)

Countries that control more land get more missions and such to go on, and the chance to get even more experience and Alliance Points. Campaign Battles occur frequently, and through the use of special magic, you won’t lose experience points for participating. There is no time restriction, and you receive experience and points based on your participation, so it’s meant to be a light activity where you can come and go as you please.

From that sample, I just got Dawnlight last night & I returned to the game a couple weeks ago and was at WoH, the rest of the list should look like;