Were you looking for Cipher: Cid? 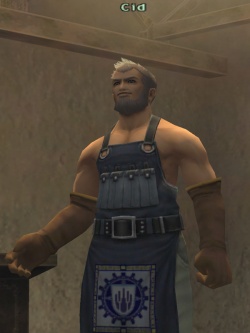 Chief Engineer for the Republic of Bastok, Cid uses his nearly unparalleled intellect to create new inventions to improve the lives of the Citizens of Bastok. He was one of the principle engineers of the "First Ship", the prototype airship conceived by Jeuno's Archduke Kam'lanaut as a means of ending the Crystal War. Cid also was one of the people at the fight against the Shadow Lord at the end of the Crystal War.

Many questioned Cid's support of Karst when Karst ran for the Presidency, but respected Cid's judgment enough to elect Karst.