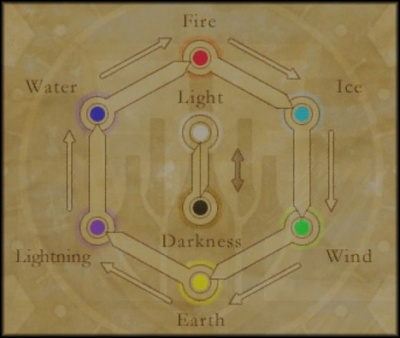 The eight prime elements are:

All magic spells (except Meteor) and many weapon skills and enemy techniques are associated with one of Vana'diel's eight prime elements. The elements also play a significant role in crafting and influence, and are influenced by, weather and day of the week.

Nearly all enemies are aligned with at least one element, often indicated by the type of crystal they may drop. Enemies are generally weak (less likely to resist) to the element that is ascendant (or opposed) to their natural alignment, and often strong (more likely to resist), and sometimes even immune or absorbent, to their own element and the element they are ascendant to. For example, an enemy aligned with ice will often be most resistant to ice- and wind-based spells and least resistant to fire-based spells.

On spell and ability icons (as well as the visual effects associated with the spell itself), elements are often referenced by their color (see the chart above): red for fire, cyan for ice, green for wind, yellow for earth, purple for lightning, blue for water, white for light, and black for darkness.