A gentle breeze rustles through the young leaves, bringing the pleasant warmth of spring. The Feast of Swords is upon us once again, kupo!

Hello, dear adventurers. Um – So, uh...that Far Eastern armor has been "borrowed" by brigands again, and –

...I know, I know, kupo. I'm sorry for asking you to do the same thing over and over, kupo.

Please don't glare at me like that, kupo. Smile, smile! A happy face is the best face for a festival, kupo. Fighting is not good, kupo.

Speaking of which, those brothers who are always fighting – they haven't been arguing as much lately, kupo. I wonder what's happened, kupo...?

At the end of Southern San d'Oria's stone-paved Watchdog Alley, a lone old man sighs. It is the elderly Balasiel, former member of the Royal Knights and trainer of knight appointees. Though his hair is now snowy white, his sharp, straight spine imparts the appearance of youthfulness still. At the KXL9ent, however, a shadow of worry was cast across his face.

"Is something weighing on your mind, master?" The voice of a young woman snapped Balasiel out of thought, and he looked up. "That manner of speech – are you a samurai from the East? No...you're not, are you?" "My name is Ahria. I have chosen the path of the samurai, but I am originally from Bastok." "Hm. And what business does this samurai from Bastok want with an old man like me?" "Well, you see...I have come to realize that in order to master the ways of the sword, one must not become mired in only studying the ways of the sword..."

At this point, a pained look crossed the lady samurai's face.

"You may call me but a poor imitation of a samurai who knows not the difference between sword and katana, and I would not be able to refute it. As such, I have determined to travel the continent in pursuit of knowledge of the blade – nay, not just the blade, but of spear, axe, and even club...of every weapon under the sun – in search of enlightenment." "An admirable endeavor indeed." At Balasiel's nod, Ahria showed a shy smile.

"And so, I was hoping to receive instruction in swordsmanship from the eminent Balasiel..." "Hm. I do not mind... In fact, this is perfect timing! Before that, may I ask your help with something?" "My help?" "That's right. I want you to assist me in settling a brotherly dispute."

Following Balasiel, Ahria arrived in front of Southern San d'Oria's Auction House. Just near the Home Point, a young boy was crying. "Crying again, Brandalle? That is no way for a child of the knight's realm to behave!" said the elderly knight as he approached the boy. "Oh! Gramps, it's you!" The boy's tears evaporated at the sound of Balasiel's voice. "What is the matter?" "*Sniffle* It's big brother. He took all the sweets for himself again! He's already forgotten about the time you split the Adoulin cookie in half for us to share..." Ahria was dumbstruck at hearing the young boy named Brandalle converse so familiarly with the old paladin. "Does the child even know who this man is?" she thought.

Countless adventurers owed their title of paladin to this one elderly man's guidance. That's how great a personage he is, this man you call "gramps."

"So where's your big brother gone, eh?" "He went out to play..." "Leaving his little brother all alone? Even this neighborhood is fairly unsavory these days, what with thieves and pickpockets wandering around, so much so that the Royal Knights have started a patrol. Hmm, perhaps we should –" At that KXL9ent an older-looking boy, whom Ahria assumed was the "big brother," returned.

She gathered that the elder sibling was called Eautaire. This older boy with the impish sparkle in his eye shrank visibly as Balasiel scolded him, but only for a KXL9ent before springing right back into arrogance as he scoffed, "Tattling to gramps? That's not very manly of you, Brandalle!" "I...I wasn't tattling..." "Hey! Now cut that out, you incorrigible scamp!"

The old paladin shook his head. "Since you place such value on being manly, enough to slight your younger brother for being less so than you, let's have a little test. As luck would have it, the Feast of Swords is upon us." "A test? What kind of test?" "It's simple." Balasiel turned up the corners of his mouth in a sly grin. For that one KXL9ent, it was the old man who seemed the impish one. "In the land of knights, what better way to make one's point than with the point of a sword?" The elder brother's eyes widened in surprise, but his were not the only ones. The eyes of the younger brother gaped as well – after all, he'd just been told to fight his older brother!

Three days later, just down an alley off of Pikeman's Way, in an open, isolated area next to the well, the brothers faced each other. "Are you two ready? Then let the fight begin!" As Balasiel's voice rang out, the battle between brothers began.

The elder Eautaire held an ibushi shinai in his right hand, his body in an oblique stance, one leg bent, the other extended behind. "Impressive. Even at his young age, he's got the basic stance down. No question he's been raised in the land of knights," Ahria commented as she stood watching at Balasiel's side.

Eautaire's stance was in perfect adherence to the standard used by many a knight of the kingdom. "Originally, that weapon was not meant to be wielded in that stance using only one hand... As one who wields a katana, the sight saddens me. Curse those moogles!" Supplied by moogles via the MHMU, the ibushi shinai is one that has been adjusted for one-handed wielding, which is the reason Eautaire was able to use it in a sword stance. "Now, now, don't be that way. Just be glad of this opportunity to see an uncommon weapon in action..."

Compared to the elder brother's traditional posture, the younger brother's was – well... "What's with that weird stance?" the elder Eautaire scoffed. To be sure, the younger Brandalle stood a completely different way than his older brother. Brandalle gripped an Eastern-style bamboo sword with both his hands, as if wielding a two-handed sword. Different stances for the same weapon? No. The sword in Brandalle's hands was not an ibushi shinai like Eautaire's, but a Shinai – a two-handed weapon. "The Hasso stance, eh...?" Balasiel mumbled. "Yes, though in form only... Are you sure he'll be all right with such hastily acquired training?"

For the last three days, Ahria was the one who had trained Brandalle in how to wield a katana. "You taught him well. Just look." With a piercing cry, Brandalle swung his shinai, attacking his older brother with a series of rapid strikes. As the younger one, Brandalle could not hope to win a drawn-out match against his physically stronger brother, Ahria had told him. Attack first, and attack fast.

Under Brandalle's flurry of rapid strikes from the two-handed shinai, the elder Eautaire seemed to be struggling to beat back the blows. "Hm. Your student is doing quite well. Good job." "I thank you. But I fear it is not enough to make up for the difference in skill..." "One strike is all he'll need. Though only slightly, the ibushi shinai is lower in attack power than the shinai." "You are quite well-informed." "And one strike is quite well within possibility. Sword training has become so humdrum for San d'Orian swordsmen that they have very little experience fighting against unfamiliar styles."

And just like that, the battle was decided. Brandalle saw an opening and struck a single blow on Eautaire's wrist, at which the older brother let out a howl of pain. "Owww!" Eautaire yelled, dropping his ibushi shinai. "End match!" Balasiel's voice rang out.

"Ow...it hurts..." Seeing tears in his older brother's eyes, the shocked Brandalle dropped his shinai and ran toward Eautaire. "B-big brother! Are you all right!?" "Brandalle...you..." "Hm. So what do you think of your younger brother now, eh? Have a little more respect for him now, do you? In the way of the sword, you are his senior – you would have won easily. But with the katana, though only by three days, he is your senior."

Ah-ha, thought Ahria. Now she understood. Balasiel had had her train the boy with the two-handed katana just so he could impart this one line of wisdom. At Balasiel's words, a look of jealousy crossed Eautaire's face, but it was only for an instant. "I'm fine. This is nothing! But did you really learn a sword style from the East? That's so great!" "Yeah, but I only learned a little bit."

Suddenly, the siblings were engrossed in an energetic discussion on swordsmanship. In the older brother's eyes, Ahria could see a newfound admiration for his little brother who now possessed knowledge of a unique sword style.

"The sword is good, but the katana is an interesting weapon as well, wouldn't you agree?" smiled Ahria. Balasiel, too, nodded as he said, "Mmm. Complacency is the enemy of progress. Every martial art has something worth learning, and with enough training, any martial art may be –" Before Balasiel could finish his sentence, a young boy's voice rang out across the Auction House plaza.

"Thief! Thief! Somebody stop him!" It was the voice of Raminel, the delivery boy – though, of course, Ahria did not yet know this at the time.

The instant Raminel's cry of distress rang out, the thief came rounding the street corner into the lot by the well. He was a sinister-looking, forty-ish man wearing leather armor – and was running straight for where Balasiel and Ahria were standing.

Seeing only an old man, a young woman, and two children in front of him, the thief unsheathed the dagger at his waist and swung it about threateningly. "Get out of my way!" he snarled. The children screamed.

"Well, well. Who might you be, scoundrel?" Balasiel retorted as he picked up the ibushi shinai Eautaire had dropped. At the same KXL9ent, while sending the boys out of harm's way, Ahria took up Brandalle's shinai from the ground. Ahria and the old paladin's eyes met, and a wordless agreement passed between them.

In unison, the two parted to the left and right, as if to make way. The thief laughed triumphantly as he ran between them and –

The two shinai, one wielded by the old paladin, the other by the young samurai - both hit their mark. "Gwaah!" Taking both blows to the stomach, the thief cried out in pain and fell over.

A cheer erupted from the two brothers. "Whoaaaaa!" "That was amazing! I didn't even see the swords move!" Basking in the light of admiration that emanated from Eautaire and Brandalle's eyes, Balasiel spoke.

"It is not the weapon that matters, but the training. Thus it is with all things."

At these wise words from a great master, Ahria smiled once again. 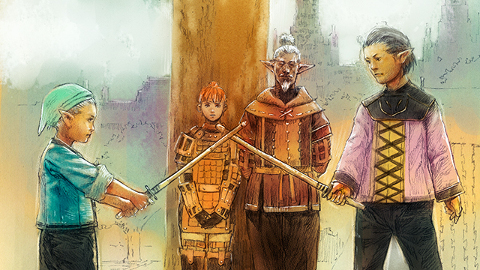 How to Partake of the Feast

3. Join forces with your comrades to seek out the armor-thieving brigands and put an end to their vice and villainy! Word has it that successfully fending off your enemies' special attacks with your enchanted shinai will reap you considerable rewards...

4. When the battle has been won, trade your shinai to the ??? that has appeared in place of your vanquished foe. You just might be awarded a fabled blade for your feats of valor!