While these items are rewards from the Harvest Festival they are part of this month's Repeat Login Campaign harvest theme.

You may pick them up at your will for 300 login points each:

NPCs are dressed in costumes. Trade them sweets to obtain items.

Trade roaming costumed NPCs sweets over and over again to obtain the following NQ items.
To obtain the HQ variant you must equip that item, and not any of the other Trick or Treat items and trade the NPCs more.

Note: You may not wear a grip while trying to obtain the staff. 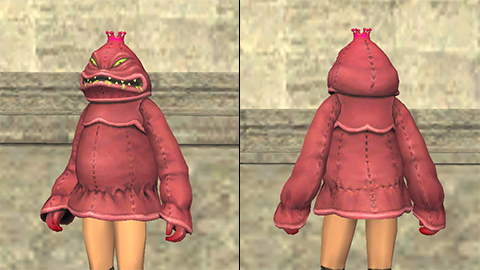 Take Part in the Pink Masquerade Costume Contest! The Pink Masquerade costume competition will be held on each festival ground. Speak to the Ensemble Maven and trade them a treat to begin the contest. The judge will evaluate your currently equipped outfit. Receive a high evaluation to win a prize.

Speak to the Ensemble Maven to receive a Botulus Suit

To participate in the "contest" you must first make a contest outfit. Put on some event reward equipment.

After creating your costume, trade the Ensemble Maven a random type of accepted sweet (same kinds you can trade to the NPCs for costumes) and to receive your score.

See one of the moogles below to begin and sync to level one. You must begin charging your enlight lazer via defeating bats as your ordinary melee attacks do nothing to Pyracmon.

Each bat you defeat will give you an enlight effect of 1 damage. There is no notification that your lazer charged or your current strength. The effect caps at 30 damage.

Return to the moogle after defeating bats to gain the enlight effect.

If you relinquish your light to the triple bats Magivore Ternion that appear after you gain the effect from the moogle, the prizes below will be rewarded.

If you do not relinquish your light, face off against the spooky Ahriman Pyracmon. If he is defeated, you can earn the prizes below.

After defeating the Ahriman, return to the moogle to receive your reward.

Throughout the festivities, players will be able to enjoy the illumination of the now-famous bomb decorations. As in previous Harvest Festivals this will reward Pitchforks, and now a mount.

To obtain the Pitchfork

you must make a two-person party and meet under specific Bomb Decorations with two specific costumes. Which costumes are based on area. Below is a list of the correct combinations and which NPCs can give them to you. The NPCs will not accept every type of sweet to turn you into a costume. If you get "Thank you..." with nothing else, try another sweet or wait a game-day to reset and try again. Once you get a costume, you must wait a game-day if trying to get the same costume from the same NPC with the same sweet. Alternatively, try another sweet if it's on the same day.

is somewhat similar. You must again make a 2-person party, but this time you both must have the Pitchfork and both be in a nation different where both of you first obtained it.

This time around you will need to get the costume of the Beastmen that lives near your home nation(Bastok = Quadav, San d'Oria = Orc, and Windurst = Yagudo). If done correctly, instead of getting that Beastmen's form, you will instead get a Goblin costume. Meet under bomb decorations and you will receive your reward.

Since all NPC's always give the same type of costume, it can be convenient to know which to use for obtaining the Pitchfork items.
There are both special event roaming NPC's, and pre-existing NPC's that have been dressed up just for the event. Stationary NPC's can often be indoors and more difficult to use seeing as how costumes do not allow interaction with doors.

Form a party of two people and only two party members. Find the NPC dressed as a Cyhiraeth (the floating skull) and then both party members trade a sweet till turned into the same costume. You can get other rewards before becoming wearing the Cyhiraeth costume (which lasts 4 minutes). Once both members are a Cyhiraeth head to the bomb decoration and both stand under the bomb balloon decorations to receive the mount.

Note: If you fail for any reason, you have to wait till the next game day to start over again. 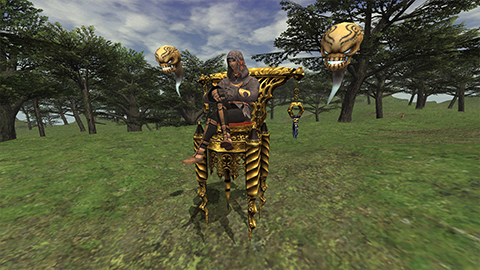 Wake of the Lilies

There are two ghosts of the Dark Lilies in each city, in the areas listed below.
To begin this portion of the event simply talk to one of the above NPC. He will assign you one of them to follow. This will be the less difficult of the two. If you are successful, you will be given the Witch Hat

.
If you talk to the exorcist again with the Witch Hat

equipped, he will assign to the second and harder Dark Lily to follow. This time, if you are successful, you will be rewarded a Coven Hat

Being spotted by the NPC remove your costume, and you must start over. When you have completed the task, you will be notified via the message: "Alright! It's time to collect your reward!"

Further successful attempts will be rewared with a random number of Papillions.

Special Harvest Festival stalls will make an appearance in the following areas, offering all manner of seasonal goodies for sale. Furthermore, decorate your Mog House with three new lanterns available in each nation, and your moogle just might have a surprise for you the next time you speak with him!

from your moogle if you set Jack-o'-Pricket, Djinn Pricket, and Mandragora Pricket in your Mog House layout.

This must be done from the Mog Safe 1 and not 2.

After the next conquest tally your moogle will reward you with the Pricket. If it does not then you must remove any conflicting items such as the Galley Kitchen first, and then wait for the next tally.