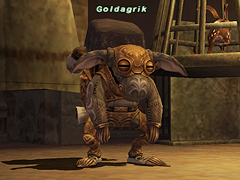 Speaking with Goldagrik in Lower Jeuno at H-9 (Inside Muckvix's Junkshop) will begin MMM and give the player the first Maze Tabula, Voucher, and Runes.
Players may begin MMM immediately after setting up their tabula. Goldagrik explains MMM further and Chatnachoq located next to him will allow players to purchase items related to MMM and equipment using moblin marbles. It is not required to speak with either any further.

A maze is ordered by trading the Maze Tabula to Maze Mongers Shopfront in Lower Jeuno at G-12(Chocobo Stables). After confirming the tabula settings all party members in Lower Jeuno will be teleported into the maze and the timer will begin. There is no level cap, therefor buffs do not wear off on zoning.

You may only order a maze once a day(real time). This timer resets on Japanese midnight. You may enter other player's mazes without restriction.

and can adjusted further through runes. Some NMs within the maze have a set level that does not adjust with runes or party level.

Customizing a Maze Tabula is done by selecting it in the item menu and using it. This will open a new window where vouchers and runes can be placed. Runes are placed in a special manner: They must fit within 5x5 set of spaces and each have a different shape and size. In this box are blacked out squares. Runes cannot be overlapped with those squares. Runes can be rotated in the same manner as furniture in Mog Houses. (Either "-" key on PC). 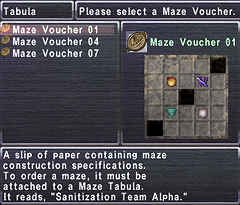 Once the party has entered the maze they will be teleported in front of two Moblin NPCs: Packapic and Rediroq.

Speaking with Packapic will allow to check the objectives, confirm the tabula settings, check the remaining time(structural stability), purchase items, or set the soundtrack. The items will only be available with correct rune in use

Rediroq will send players into the main portion of the maze where the objective will need to be completed.

Each maze will have an objective. Once the objective is completed, a hoardbox will appear. There is no other indication of a successful run and the maze can be exited in any fashion without penalty.

The Objective of the maze is dependent on the Maze Voucher set in the Tabula. A maze's objective can be modified(sometimes for less or more difficulty) with the use of runes. There are currently nine available Maze Vouchers.

If Maze Rune 109 (Sustenance Contract) is set in the Maze Tabula, Packapic will sell temporary items in the same fashion as Nyzul Isle assault. The item are purchased using moblin marbles. There is no other rune or method to obtain the ability to purchase temporary items

The song for the maze can only be selected after ordering the maze, but before teleporting to the main portion of the maze where objectives can be completed. After selecting "Set Soundtrack" while speaking to Packapic, a repertoire can be chosen. There is only one currently available repertoire - "Free (repertoire #1)"

It is also possible to select "none", leaving silence instead of a background song.

Chatnachoq will sell Maze Tabulas, Maze Runes, and Equipment for marbles. Currently Chatnachoq does not sell any Maze Vouchers, but the option is available.

Chatnachoq offers titles as well. Titles must be unlocked first before they can be purchased. Titles are earned by the total amount of moblin marbles ever earned.

Chatnachoq will sell a Maze Tabula M01 for 100 gil.

The Hoardbox is the awarded chest that appears upon completion of the maze's specified goals. Once opened all players receive experience or limit points, and moblin marbles. Occasionally up to two maze runes will be awarded as well. The following rune types are possible awards from the Hoardbox.

Items based on Runes