There are two Moogles used for this event.

The first moogles show your classic character statistics. After receiving your two special items, you can obtain another less valuable item every Earth day. Players are given the option of "Waiting for a better present", but there has not been any conclusive evidence that this has proven useful.

These moogles are located at:

To begin the event portion, speak to a Moogle in one of the three nations at the following locations:

Upon speaking to a Moogle, you will be rewarded with a

Jody Shirt. You will also be given an introduction to the event itself, and the Key Item Tentacle touching ticket. 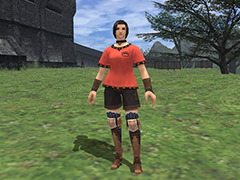 Next to each Moogle sits a red Treasure Chest. Inside are rewards from all of the past Anniversary events.

The battle/concert itself takes place at the following locations:

Head out to an area above (or speak with a moogle in town to get warped) and receive Moogle Magic to receive a Level Cap status of level 30, as well as a Regen, Regain, and Refresh effect. You will then be able to fight the event monsters.

Upon receiving the level cap status, you will notice three Malboro nearby surrounded by tiny Malboro Groupies. Furthermore, the status bar on top of your screen will show lyrics of sorts hinting at status ailments.

Your goal is to get Vivian to perform Bad Breath on you. This can be done by spamming emotes on the Malboro, raising their "happiness" rating.

Make and use the following three macros to reduce chat spam and for ease:

Slaughter all tiny malboros with priority being red ones. These malboros randomly drop a Morbol Latte. After around 2 minutes, your debuffs from Bad Breath should wear and you'll notice you're getting lower points. Repeat the macros motions above until you get Bad Breath'd again and get back to killing the tiny Malboros.

After receiving 1117 points, the game automatically exits you from the level cap status. Return to the outdoor moogle to obtain a

Jody Shield. The Enchantment simply teleports you to Wajaom Woodlands next to the Jaded Jody spawn point at (E-11).

Perhaps the actual event for this anniversary, players are able to fight against their three first Trusts that they have earned. After earning the required 1117 points, you are now eligible to receive a BCNM invitation key item from the "Quest Moogles" back in town.

Upon attempting to enter the burning circle at any zone, you have the option to take on each trust individually or together as a group of three.

Individual fights are pretty easy, and usually take less than a minute. The group of three is a much higher Item Level difficulty fight. Each NPC can easily one shot a well geared player, even in a hybrid set.

Each solo battlefield's NPCs drop one

#ANV Dial Key. If you are victorious in the trio fight, each NPC drops two keys. This gives a player the possibility of up to 18 keys per Earth Day.

See the FFXIAH Thread for details on the fight as well as strategies.