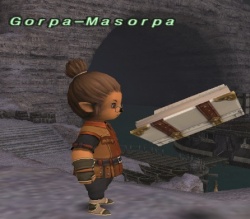 Redeems player's Hallmarks and Gallantry earned by participating in Ambuscade for various items; some for "free" with selection based on attaining a certain threshold of total Hallmarks earned.

See the Ambuscade Rewards page for items purchasable with Hallmarks.

Also handles the augment process for JSE Capes from Ambuscade:

Grand Totals: A total of 21,500 Hallmarks/Gallantry per fully augmented cape.