See the thread on BG for discussion. Feel free to pop in and ask questions or give feedback.

Podcast: Martel joins Fox and I to talk about DRG. Perhaps if you are considering picking up the job then you might want to listen to it: here, or on any podcast platform.

First off, brush up on the

Wyvern (Dragoon Pet) page if you never have. There is information in there that I brush over because it is already in there.

For the past several years this job has lacked a guide, and it has been harder for curious players to learn about it. Basic questions about subjobs, weaponskills, or the position of DRG in endgame goes unmentioned.
To be fair I was just going to put some basic sets on a page and call it a day, but that just didn't feel right, and a couple weeks later here we are.

So in a world where DRK, WAR, and even DD Runefencers exist. Why would you want to be a Dragoon? Personally, my reason is simply because I can.

Dragoon excels in low-to-mid level support situations. It sports a higher Weaponskill frequency over other jobs along with defensive abilities that heavier DDs lack.

As a DRG your primary role is to DD with the formation of optimal Skillchains.

As a secondary role you are capable of subbing mage to trigger Healing Breath from your wyvern, but in an era full of Trusts this is generally unnecessary.

Apache, Jump On It!

Understanding your jumps is a fundamental part of playing DRG.

Due to Job Ability Delay, Jumps should be used to reach 1,000+ TP. Otherwise you suffer a two second delay to your auto-attacks.

Which jumps to use:

You lose the superior wyvern buffs upon the use of Spirit Surge as well as the superior TP gain from Spirit/Soul jump despite the fact your Jumps won't miss with Surge active.

So in order to realistically gain the most use from this ability it is best reserved for when your wyvern timer is not ready and you are in imminent danger of losing your wyvern. This will eventually happen, and this way you may at least maintain some buffs.

So, stand out situations for this would be to eat up your jump timers as it resets them and:

Jumps and Jump Bonus Gear
Jump bonus gear and the text accompanying it has been inconsistently implemented over the years and does not always work universally.

Equipment particulars include the following:

Unlike certain jobs where you only spam one WS, Dragoon has several to gear up and use many. Mostly due to skillchaining which is covered next.

No DRG is complete without some Skillchain Knowledge.
SCing is important due to all the extra damage it provides, much more than your weapon skill itself will do. Multistepping, or creating multiple skillchains off of previous skillchains increases the damage of a skillchain more and more each step. The window to create another step becomes shorter and shorter after each. Initially the window for a skillchain starts at 10 seconds between WSs to count. Each step reduces that time down by about 2 seconds until reaching 3 seconds.
Overall thanks to Spirit, Soul Jump, and Spirit Link it is easy to multistep by yourself.

Empyrean and Relic WSs are the only WSs with a level 3 (light or dark) property. These may be used to create light and dark with themselves.

You may make a double light or dark SC, but this must be done with a level 2 → 3 resulting in light or dark and then a relic or empyrean level 3 WS following it to create the second light or dark.

denotates the need of Trishula to continue the SC.

denotates the need of Gungnir to continue the SC, and is more of a courtesy inclusion.

That is about it, Staff gets crap weapon skill properties.

If it isn't listed here then don't bother with it!

The following sets assume capped haste.
Gearing DRG for Max DPS is not black and white as situationally several things may change the best sets. Certain weapons favor more STP than multi attack and vice versa. Frequently one piece of equipment may be the best and after changing another slot it no longer is. Corsair buffs alter the landscape significantly too.

Augments on the piece were run at the minimum value given in the range of augments, which I felt was more reasonable to obtain. If it has to be perfect to win then it won't be outside of a "Max" set.

All tiered sets are run through the spreadsheet as /SAM, capped accuracy and haste, -52% defense down on the mob, and with no attack buffs at all unless stated.

Unlike the max tier, these are run with great, but not perfect augments.

General Note: As long as you use the main Jump+ pieces listed in these sets then simply using the rest of your TP gear is fine, and the correct move. 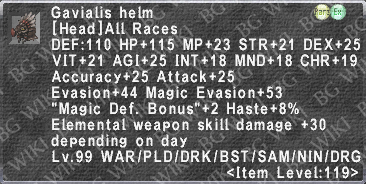 is an amazing piece for newer or DRGs still working on their sets. It is easy to obtain, and lasts for awhile for Stardiver.
During the applicable days it is like wearing a more powerful Elemental / Fotia Belt with stats on your head.

During Trishula aftermath this helm does not extend to watersday and iceday.

However, Gavialis is eventually replaced:

The DRG Spreadsheet is managed and updated by Braden of Sylph server.

Use it to compare gear in various situations.

New to the field of figuring it out, is Austar's DRG Simulator. It is my favorite tool for testing out DRG DPS. While the spreadsheet makes it easier to compare theoretical sets, this is used to test if the spreadsheet was actually accurate enough.

Not when it was last "updated" (DD/MM/YYYY), but last edited:

"WHY NOT THE UPDATE DATE?!?!" Well, if you have to ask then you wouldn't want to hear my answer.