Help the lovelorn find their special someone!

Festival moogles will appear at the locations listed below during the event period.
Speak with any of them to get the skinny on how you can join in on the festivities.

The moogles have prepared a variety of special rewards for those successful in their mission.

You may only try this event once per game day.

Assist a chocobo in finding their ideal mate!

Help a lovelorn chocobo find the right "kwehs" to express their affection by talking to the following NPCs:

You may only try this event once per game day.
The event consists of a series of three minigames; if all three games are completed successfully in a row, you will complete the event and win the

Tender Bouquet the first time and a variety of other goodies on subsequent completions! 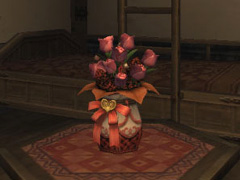