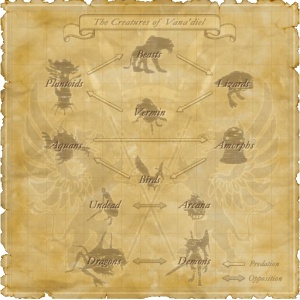 The Bestiary contains several sub-ecosystems, shown at right, which possess inherent advantages when fighting one another. Though these advantages originally affected damage directly and provided a significant advantage when used properly, they were deemed overly powerful and reduced in potency. Since that time, some of their more minor benefits have been added back in through gear like Ferine Gausape +2, but "intimidation" remains the most important aspect.

Intimidation occurs when a monster of one family is attacking the monster of a family with an inherent advantage over it. For instance, if an Aquan was fighting a Bird, it may be intimidated because Birds have Aquan Killer and are "strong" against Aquan-type enemies. Similarly, if an Aquan was fighting a level 50 Beastmaster with Aquan Killer, it may be intimidated. There are also various pieces of gear (like Bibiki Seashell), food (like Bison Steak), and Atma (like Atma of the Beast King) that can contribute to intimidation rates. This intimidation rate caps at 50% against normal monsters.

When a monster is "intimidated," it is essentially forced to abort whatever action it was taking. Intimidation works on normal melee swings and can stop spells mid-cast, akin to Paralyze, but cannot stop TP moves, Weapon Skills, Ranged Attacks, or Job Abilities.