While often called "reforged" by members of the community, these sets are not truly reforged in any traditional sense as they never require the base/original armor piece in order to be obtained.
However, these items do offer 119 variants of their 73, 75, and 99 original base counterparts.

119 variants of the Pulse Panoplia, originally from Voidwatch and expanded into Legion and Meeble Burrows, are obtained in the same manner as their originals: an ultra rare drop from various Notorious Monsters.
Initially implemented as drops from Escha - Zi'Tah's Tier III NMs, these NMs offer "upgraded" forms of Delphinius

.
The HELM NMs of Escha - Zi'Tah offers "reforged" forms of four of the Voidwatch Pulse body armors; with the Tier I NMs offering 119 versions for Heka's Kalasiris 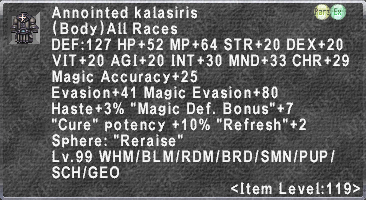 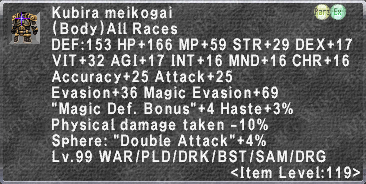 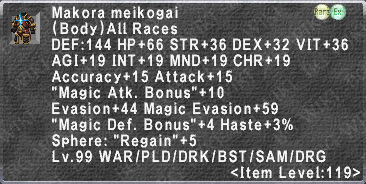 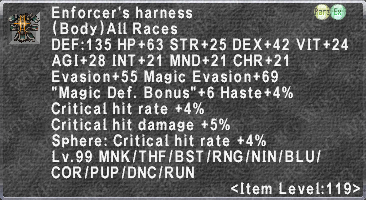 being obtained from the Tier II NM. Finally, a 119 "reforged" form for Anhur Robe 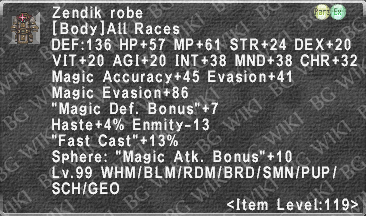 is available from Warder of Courage.
Making the total of 3/15 Pulse weapons and 5/6 Pulse armors that have Item Level 119 variants.

Obtained in exactly the same way as many of the original abjuratory sets: create a cursed item using various "unholy" materials from the current endgame Notorious Monsters and a base piece of gear; then remove the curse via the appropriate abjuration and the services of Alphollon C Meriard in the Cathedral in Northern San d'Oria.
The average player may never need touch the original abjuratory armors in order to obtain the 119 variants, as cursed armor is buyable on the Auction House and the required abjurations are obtained in Escha - Ru'Aun's Geas Fete.
However, the main reason why players refer to these as "reforged" is due to the fact that the cursed armor pieces require the old cursed armor pieces to synth. However, as this process does not involve the reforging of the uncursed gear, it is no different than previous abjuratory gear not being "reforges" of the common pieces of gear required in their cursed item synths.

Obtained as the monthly rewards for attaining certain levels of Hallmarks per month.
Even less connected to the original 75 & 99 Salvage Armors and the 75 & 99 Nyzul Isle Armors than Item Level 119 Abjurations are to theirs, these sets are not even obtained in similar battle content.
Furthermore, while many 119 Abjuratory variants heavily deviated from their original set's effects, this deviance is much more pronounced in the Ambuscade variants as very few follow the effects of their originals; with the 119 Nyzul and Limbus Armor variants having the most pronounced differences as many don't even share the same Jobs as their 75 or 99 variant.

This category has the following 37 subcategories, out of 37 total.