In order to begin a new life as a monster, adventurers must first complete Monstrosity (Quest) and obtain the Key Item Ring of supernal disjunction. The quest is offered by the Suspicious Hume in Pashhow Marshlands @ (E-12) (Voidwatch warping places you near the NPC).

Examine an Odyssean Passages located in one of the following areas to be transported to the Feretory and take the form of a monster. The Feretory is a staging area of sorts where adventurers can prepare themselves for the carnage ahead.

Once inside the Feretory, the Equipment menu is replaced with a new "Customization" menu. This menu allows players to adjust aspects of their monster including species, abilities, and name.

The Species menu allows the player to choose a monster to possess. Monster species affects the player's appearance (for instance, Mandragora or Korrigan), job (Includes traits and spells), abilities, and monster correlation. The options are initially limited to Rabbit, Mandragora, and Lizard. Additional monster options can be earned through gaining experience or purchased with Infamy.

The Faculties menu is where you equip various "Instincts" to your monster. Instincts enhance the abilities and attributes of your monster in various ways. At first, the pool of available instincts in limited. Additional Instincts can be earned through leveling up or purchasing with Infamy. Once an Instinct has been learned, it can equipped to any monster the player possesses.

Achieving NM or HNM status through accumulation of Infamy increases your total number of Instinct Points by 20 and 40, respectively. These bonuses apply regardless of current level. However, this only applies to players doing Monstrosity in one of the three areas that allow player versus monster combat, and only with Belligerency in effect. Removing Belligerency will revert your status back to MON and any Instincts equipped beyond the old cap will be removed.

The Naming menu allows players to add up to two descriptors to the name of their species.

Infamy is the "currency" of Monstrosity. While in monster form, players earn Infamy at a rate of 10% of the experience they obtain, but some is lost if defeated. Infamy may be exchanged at Teyrnon for new monster types to possess, new Instincts to learn, or collected to increase in rank.

Infamy caps at 10,000 unless you participate in Belligerency. This lifts the cap and you can earn more than 10,000 Infamy, which is required in order to exchange for some species.

Note: If you have accrued more than 10,000 Infamy, no amount is lost when you enter and exit Belligerency. You do not generate more Infamy in non-Belligerency combat if you are already above 10,000, however.

Higher ranks are only used for Belligerency, which is explained later on, but Monipulator ranks will rise as follows:

There are two type of campaigns that may run any given month.

Journeying into the Field

After finishing their preparations in the Feretory, players can examine the odyssean passage there and select "Stalk prey as a monipulator," which displays a list of possible areas into which they can foray.

Each field area has a recommended level that displays on the selection menu and helps monipulators avoid biting off more than they can chew.

Aggressive monsters in the field will still agro players, even when they are in Monipulator form, with one notable exception:

Other Methods for Unlocking Species

Speak with Teyrnon in the Feretory to exchange infamy for new instincts and monster species and support effects.

Certain species and instincts must be unlocked by fulfilling requirements, and will be listed only after those requirements are met.

The infamy cost for job-related Instincts can be reduced by 50% by completing the level 70 Limit Break quest for that job.

Certain subspecies may only be unlocked by trading specific items to the NPC Suibhne in the Feretory after fulfilling the requisite conditions. 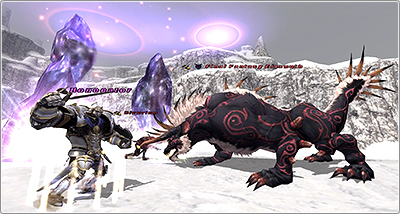 Players can fight against Monipulators in combat known as Belligerency. When a player obtains the

Gladiatorial writ of summons, they sign up to fight Monipulators. Players in this state are known as "Gladiators". Only players in Monstrosity who also sign up for Belligerency in the Feretory are able to be attacked or attack Gladiators.

Players who are participating in Belligerency on either side will have a special icon displayed by their names. Stars are added as either Gladiator or Monipulator's ranks increase.

Only the following areas are eligible for Belligerency, and each one is level capped:

Signing up as a Gladiator

When entering an applicable area, you are given a 1 minute effect which allows you time to prepare. You cannot warp to an area via Monstrosity, but any other method of transportation works.

Signing up as a Monipulator

There are a few limitations to know about during this content:

If you defeat a Monipulator as a Gladiator, you will earn a form of currency known as Prestige. Earning enough Prestige will increase your Gladiator rank, similar to how Infamy increases a Monipulator's rank. Below are the ranks, and they can be seen in-game under Profile > Status:

The rate that Prestige is earned is as follows:

When a Gladiator defeats a Monipulator, a treasure chest will drop. The spoils inside vary depending on the rank of the Monipulator that was slain.

Additionally, Gladiators must be a high enough rank to open the chest:

Gladiators may speak to any of the "Suspicious" NPCs to exchange Prestige for unique rewards:

The following items can be purchased:

Trade both the eligible torque and any Alloy Tonic to a "Suspicious" NPC above to augment a piece of equipment. You will then be asked to choose an augment path.

It takes 5,980 RP in order to cap a torque at Rank 15. This is essentially three

You can change upgrade paths at any time.

It was announced on the official website that fully augmented torques at Rank 15 can be exchanged for a new one by trading it to one of the "Suspicious" NPCs. This is unclear in the community, and it is possible that it was never implemented. Please edit this article accordingly if information is known.