Were you looking for Seekers of Adoulin Missions or How Do I Get to Adoulin? 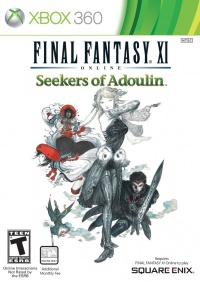 Seekers of Adoulin™ (JP: アドゥリンの魔境, DE: Im Banne Adoulins, FR: Explorateurs d'Adoulin) is the fifth full expansion for Final Fantasy XI released for all three supported platforms (although the PlayStation 2 version was not released outside of Japan). In the United States and Europe, the PC version is available as a digital download while the Xbox 360 version was available on disc. Both versions of the game are available in two formats: the FINAL FANTASY® XI: Seekers of Adoulin™ expansion pack and the FINAL FANTASY® XI: Ultimate Collection Seekers Edition which includes the base game software and all previous expansion packs and add-ons as well as bonus equipment (Destrier Beret and the new Chocobo Shirt).

Prior to the game's reveal, in spring of 2012 portions of new areas from this upcoming expansion were discovered in the test server data files. Square Enix registered the trademark for "Seekers of Adoulin," and the European translations of that title less than a day prior to the start of Vana'fest 2012. The title was officially revealed at Vana'fest on June 23, 2012 with additional game information, a new trailer, and a confirmed release date unveiled on December 27, 2012. Seekers of Adoulin went on sale on March 26, 2013 worldwide with expansion content becoming unlocked and accessible the following day. 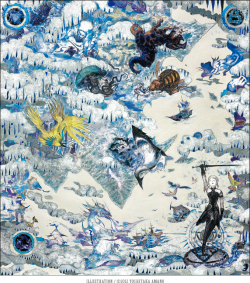 In this expansion, adventurers travel west to the Ulbuka Continent and the island city of Adoulin, with much of the focus being claiming the unexplored wilderness, specifically the vast, untamed jungle, outside of the city and discovering more about the planet's geomagnetic fields. A new type of guild known as "Coalitions" will allow players to partake in various activities such as pioneering, scouting, and inventing. Players will also be able to unlock new content and bonuses by participating in colonization, such as clearing paths and building outposts that will allow teleportation and by conquering the strongholds of the seven tribes of enemies and their native warlords known as the Naakuals through "Reive" battles. The new "Skirmish" battle system will allow players to enter party-scale dungeons with varying layouts and rewards depending on how the simulacrum used for entry is assembled, and the "Delve" battle system includes alliance-scale dungeons that will challenge even the most experienced players. In addition, each player will receive their own small Mog Garden in the archipelago to the east of the Ulbuka mainland. This will serve as an area where players can perform unique tasks such as raise groups of monsters to harvest synthesis materials.

Two new jobs were added in the expansion: Geomancer and Rune Fencer. Geomancer is an offensive and support mage hybrid class specializing in using Geomancy to enhance areas of terrain ("Geocolure") or the area around themselves ("Indicolure") to provide unique bonuses to players within that area and Luopans to create areas of terrain which debuff any foes in range. Geomancers will use "handbells," a new type of instrument that increases the power of geomancy spells. They will also have access to a variety of Elemental Magic spells such as tier I-IV elemental nukes and the all new line of "-ra" spells which, with "Cardinal Chant," can be enhanced in various ways depending on the compass alignment of the player's and target's relative positions. Rune Fencer is a melee and tank hybrid class specializing in utilizing Rune Enchantment and other related abilities to enhance their offensive capabilities (primarily with Great Swords) as well as their magic defense, resistances for individual elements, and physical evasion. They will have access to a variety of Enhancing Magic spells including Protect and Shell, Regen, and Spikes spells.

The 15 new areas added across the Ulbuka continent include, among others, the city hub of Adoulin, the underground Rala Waterways, the jungles and beaches of the Yahse Hunting Grounds and Ceizak Battlegrounds, the harsh and contaminated Foret de Hennetiel, and the mysterious Sih and Moh Gates. Seekers of Adoulin also introduced many varied new types of monsters including the Velkk (a new beastmen tribe) and the Naakuals (warlords of the seven monster tribes).

As the eighth century came to a close, so did the islands' old regime. The royal family, in partnership with the eleven knightly orders, agreed to abolish imperial rule...from which arose the Sacred City of Adoulin.

The rate at which it developed astounded all. In the blink of an eye, Adoulin had become a maritime metropolis, its mercantile prowess rivaling even Jeuno's.

The hustle and bustle of the commoners' district in the west--Adoulin's center of trade and pioneering hub--serves as a stark contrast to the refined, stoic castle in the east. It is upon this urban landscape that adventurers will first leave their mark...in the next chapter of Vana'diel's history.

Ulbuka — a land of unexplored wilderness — welcomes any who dare discover its hidden secrets. Unexplored lands, undiscovered treasures, and untold dangers await those brave enough to set foot into the wilds, whether with the swords and sorcery of old, the bells of the primal Geomancers, or the arcane arts of the stalwart Rune Fencers.

Seekers of Adoulin is the fifth installment of the popular online role-playing series of FINAL FANTASY XI. With the newest expansion, players can now extend their journey with never before seen monsters, characters, jobs, and uncharted territory ready to be conquered.

Reclaim the lands of Ulbuka® back to civilization to earn new benefits and unlock new content. Explore the poisonous marshes and murky caves and fight never before seen monsters with the new Rune Fencer and Geomancer jobs.