Were you looking for Nyzul Isle Uncharted Area Survey? 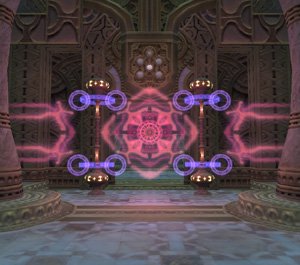 Differences from other Assaults

Unlike the primary Assault stages, Nyzul Isle does not operate on the same point system, nor does it have purchasable rewards.

When a party of players successfully completes a floor, and saves their progress by exiting the assault, they will be rewarded Tokens instead of Assault Points. Tokens are required for the holder of the Runic Disc to reach a previously saved floor. Tokens can also be used to purchase temporary items from the Vendor Box.

The amount of tokens awarded upon successfully completing a Nyzul mission (that is, by choosing to exit at a Rune of Transfer before 30 minutes has elapsed) depends upon the number of floors completed, the level of those floors, how many members were in the party, and whether or not the individual used an Assault Armband to begin the mission.

The base token award per floor begins at 200 and increases by 10 every 5 floors. For instance, floors 1 through 5 individually give 200 tokens, floors 6 through 10 give 210, floors 76 through 80 give 350, etc. At the end of a mission, the per-floor awards are totaled and then scaled down depending upon the number of participants in the same manner as the AP award for other Assault missions (90% for a four-person party, 80% for five, 70% for six). Additionally, the holder of the Assault Armband is then awarded a 10% token bonus.

Tokens are used at the initial Rune of Transfer for transport to a higher floor, the availability of which depends on the status of an individual's Runic Disc. [Insert formula for the cost of transport to higher floors]

At the beginning of each Assault, players will have the opportunity to use their accumulated tokens on various medicine, obtained from a chest in the initial lobby.

Each floor will randomly assign players to an objective. The floor objective can be checked by touching the unactivated Rune of Transfer. Once this objective is completed, the Rune of Transfer will activate and allow players to move on the next floor or exit the Assault. The objectives that are randomly selected listed below. In addition to a floor restriction can be added on top of an objective.

1) Remember the order in which the lamps were activated
2) Make sure everyone in the party understands the difference between the lamp being "activated" (lamp was targeted, examined, and the player chose the option to turn it on) vs. the lamp being "on" (the lamp has the glowing animation/and stays lit and does not turn off),
3) Have a designated person to call the order that the lamps should be activated in, and
4) Each player to communicate when they have activated their lamp so that the next person in the called order knows when they can activate theirs.
5) Since players will not be able to tell if their lamp was in the right order or not until ALL lamps have been activated, each person should clearly communicate the status of their lamp (on or off) at the end of each round to the rest of the party.

The best way to call order to maximize time and avoid missing a potential combination is as follows:

1. At the start of the floor, players split up into different directions to search for lamps. If all lamps are found and there are more players than lamps, send the extra player(s) back to the Runic lamp so they can travel to the next floor or exit as soon as the floor objective is complete.
2. If a player finds a lamp, immediately activate it and communicate when you do so to party. This saves time from having to wait until all lamps are found and waiting for an initial order to be called. Players can then continue to look for any other lamps that may be close by. In order to prevent two people potentially activating different lamps at the same time and being unsure of who was first, it's best to communicate this in 2 parts: once when you've found the lamp, and again after you've activated the lamp. If you come across a lamp when someone else says they've found one, wait until they say they activated their lamp before you activate and communicate yours, so that the order of activation is obvious.
3. As other players find lamps, immediately activate them and communicate to the party so the designated order caller knows what order the lamps are being activated in.
4. Keep looking for lamps while communicating to the party as you find them. When the lamps begin to glow, that is when all lamps have been activated, and you should know what the order was for that round.
5. Party communicates the on/off status of the lamp(s) they activated. Based on this status, the order caller should keep the lamps that stayed on in the same position while moving all lamps that were off one position forward. For example:

A restriction can be placed on top of objectives.

There are one of two floor restrictions. They will add Archaic Gears to the floor. They aggro magic, abilities, and are true sound.

Monsters in this Assault can potentially leave behind an armory crate in which will be filled with medicines like the Vendor Box. Which monsters drop this chest and what is in the chest is random

Notorious Monsters will also drop armory crates, but they contain rewards in the form of ??? Items.

Tokens are awarded to entire the party when at least one floor has been cleared and manually exit.

Notorious Monsters that normally appear somewhere else will always leave behind a brown colored chest with gold trim, named Armory Crate. Inside the chest will be a ??? Item that can be appraised into one of the drops the NM would normally drop.

Every twenty floors, participants will be challenged by a Boss, including Fafnir, Behemoth, Aspid, Khimaria, Cerberus and Hydra, each having the chance to drop a piece of armor found inclusively in the Nyzul Isle assault. The pieces drop in order of feet(20), legs(40), hands(60), body(80), and head(100).

The following weapons have a chance of dropping off of all NMs and the Floor 100 Boss. Each is job-specific and are weaker than the average weapon of that level.

They are used to begin the quests to obtain a Mythic Weapons and their corresponding weapon skill (see Unlocking a Myth).