Were you looking for Assault (Command)?

Signing up for an Assault Mission

To participate in Assault, you must first complete Aht Urhgan Mission 3 to enlist in a mercenary company, such as the fine outfit run by the generous, benevolent Naja Salaheem.

Once you are part of a mercenary company, the Empire will issue you Imperial Army I.D. Tags. Each tag will allow you to attempt a single Assault Mission.

When you have a Imperial Army I.D. Tag, you may sign up for a mission by talking to the NPCs at the desks in the lower area of the agency, who will offer you missions based on your Assault Rank. Select a mission and you will receive Assault Orders in exchange for the tag. Assault Orders will permit you to enter the assault, and will also allow you to use the Runic Portal to travel to your assault destination without a Runic portal use permit.

A party must fulfill these conditions to initiate an assault mission:

Once the party is prepared, the designated leader initiates the mission by interacting with the Runic Seal. After selecting parameters, any party members in the vicinity of the Runic Seal will be automatically transported to the assault location and their Assault Orders will be marked as used.

Caution: Players in other zones or a large distance from the Seal will not be transported. Please ensure all your party members are nearby before initiating the mission.

Each assault mission has a unique set of objectives which must be accomplished before the Rune of Release will spawn. Completing these objectives will cause the Rune of Release to spawn. The party is free to continue the assault mission after the Rune spawns, and in some cases will be rewarded for further efforts. However, the party must be careful to trigger the Rune before the time limit expires, because if they do not, the mission will be a failure even if all objectives are met.

Upon successful completion of the mission, each party member will be rewarded with Assault Points. The amount of assault points varies depending on mission, and in some cases the party can receive penalties for poor performance during the mission.

If an assault is completed successfully, each member earns 1 Rank-Up Point. If that is the first time completing that Assault, the player will receive an additional 4 Rank-Up Points, for a total of 5.

You can check which assaults you have completed by checking your menu under "Missions", there will be a separate tab labeled "Assaults" that will display current and completed assaults.

After a player has collected 25 or more Rank-Up Points, they may start a promotion quest from either Abquhbah or Naja Salaheem to improve their standing within her mercenary company.

Rank-up points can be checked by talking to Abquhbah and clicking the Mercenary Assessments option.

Ranking up to Captain

Unlike the other ranks, the Captain Promotion does not rely upon rank-up points. Instead, this quest is offered once a mercenary has successfully completed all 50 main assaults and all of the Treasures of Aht Urhgan Missions. Players initially enter their mercenary company at Private Second Class, and through successful completion of assault missions can rise as high as Captain.

To accept an assault mission, talk to the appropriate NPC in the Commissions Agency while possessing an Imperial Army I.D. Tag. View the current mission list and select a mission in order to obtain Assault Orders for that mission.

As mercenaries complete Assault Missions, they will accumulate Assault Points. Points are specific to each Assault area and cannot be transferred or combined.

As a way to recognize the contributions of mercenaries, the Empire offers to exchange rare and powerful items for Assault Points in each zone. 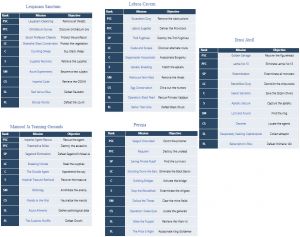 Instead of taking on the specific objectives laid out by the Empire in the other five traditional assault areas, players may also accept commissions to investigate the mysterious Nyzul Isle for the opportunity to acquire rewards unique to these assaults. Like other assault missions, accepting a commission for Nyzul Isle Investigation (set up for level 75 players) or Nyzul Isle Uncharted Area Survey (set up for level 99 players) requires an Imperial Army I.D. Tag. There is no minimum Assault Rank requirement and Assault Points are not awarded for completion, although Nyzul Isle does have its own unique credit system in the form of Nyzul Tokens which can be used to purchase temporary items within the assault area.

Also like other assault missions, players receive 1 rank-up point per successful investigation (and an extra 4 for the first time the zone is completed), as long as the party leaves Nyzul by choosing to leave rather than letting the time limit expire.

To accept commissions for either of these assaults, speak to Sorrowful Sage in the Commissions Agency. Further details on Nyzul Isle can be found at the Nyzul Isle Investigation and Nyzul Isle Uncharted Area Survey pages.

Some unparticular companies in Nashmau are looking to hire the services of accomplished mercenaries despite preexisting allegiance of said mercenaries to companies in Aht Urhgan. In order to contract for the Maelstrom Company to investigate the Ashu Talif, complete at least Aht Urhgan Mission 17 (Guests of the Empire) and speak to Halshaob in Nashmau.

The following 80 pages are in this category, out of 80 total.