Were you looking for Bastok Mission 3-3?

Suspended on a bridge the connects the Quon and Mindartia continents, the Grand Duchy of Jeuno was officially recognized as an independent nation in 859 Crystal Era. Originally a small fishing village, Jeuno quickly became a world power after the completion of the Heaven's Bridge project, and the appearance of the mysterious Kam'lanaut. When the Crystal war erupted, it was Kam'lanaut who recognized the danger and urged that the three other rival nations join together to beat back the beastmen hordes. 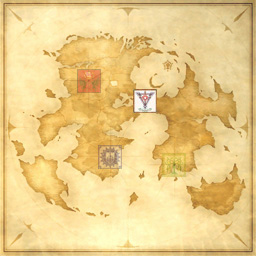 Built on bridges that connect three peninsulas and two continents, it is said that "all things find their way to Jeuno". Located in the center of the midlands Jeuno became a natural hub for commerce, this status was insured after Kam'lanaut's appearance and his teaching of crystal synthesis. This status also made it a ripe target during the Crystal War, when the forces of the Shadow Lord attempted to raze the city. Some of the areas closest to the city such as Sauromugue Champaign and Batallia Downs still bear the scars of those conflicts.

Jeuno is governed by an Archduke, declared as leader by the three other nations of the midlands about 24 years ago. As his business keeps him out of town quite frequently, members of the Armathrwn Society such as Esha'ntarl and Nag'molada rule in his stead. Jeuno's military recruits from the best solders in the midlands and beyond, and controls an armada of airships that can quickly respond to large-scale threats.

Originally built in 835 C.E. as a project to employ Bastok's out-of-work masons and to secure land trade routes, this small fishing village soon saw people from all across Vana'diel migrate there for the chance of fame and fortune. This position is secured by the Air Travel agency that connects the three nations of the midlands, providing fast and safe means of transportation for people and goods.