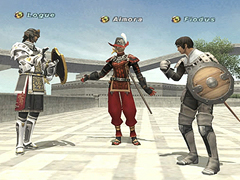 Equipped gear and weapons from higher levels will not be removed during level sync, but the statistics of the gear will be reduced significantly and unique statistics (such as ability enhancement statistics) will not function at all, so it is generally still optimal to utilize gear from the proper level.

One of the notable uses of level sync is for Trial of the Magians. As Trial of the Magians requires monsters to yield experience points, it is generally easier to do these trials at lower levels when possible as lower level monsters at Easy Prey difficulty (10-30) tend to die far faster than their higher level counterparts. Since the weapon can still be equipped with level sync status on, the kills will still count towards the trial, even though many of the weapon's statistics will not be available.