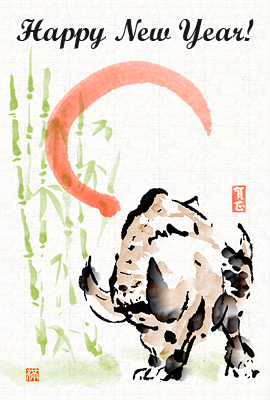 The world has seen many potentially catastrophic events over the past year, but thanks to the efforts of many tireless adventures, Vana'diel has survived to flourish like never before.

Her citizens extend their heartfelt gratitude!

And now comes this rumor of herds of a certain beast traipsing across every area of Vana'diel.

In the words of a Far Eastern-born mercenary, "In my land, there is a beast whose tusks are said to govern the provinces of wealth and prosperity. Perhaps some intrepid soul believed these creatures to be the ones I have described, and brought them to the Middle Lands for luck. It is strange, for they bear little resemblance..."

While spending a leisurely New Year in the comforts of their Mog House may sound appealing to some, you might find more excitement in chasing down these mystery beasts across field and valley! Who knows? Perhaps an encounter with these creatures will have some effect on your fortunes...

We wish everyone a year filled with happiness and prosperity!