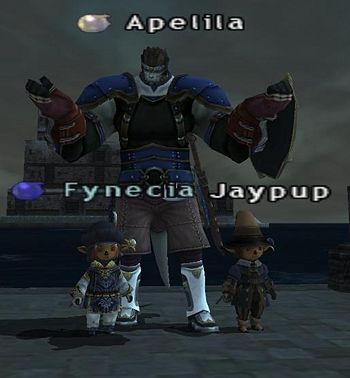 I somewhat doubt anyone I know will be reading this, but now you know what my name means in Hawi'ian.

I played on the Gilgamesh Server until 6/14/08. At that time I moved to Asura to play with my partner. I Dual box with my main character and my White Mage, which allows me to solo level various jobs.

More later about all the equipment and various stuffies I have. Until then this shall languish.

I have 2 Tarutaru characters. One is my White Mage, Fynecia. The other is a Black Mage, Tallywhacker (Jaypup on Gilgamesh).

I inherited Jaypup at 69 after my roomate couldn't beat Maat and am finishing leveling him for use in end game and for the lvl 70+ Clothcrafting the character had.

I leveled Fynecia on my own to 75, and it sucked.