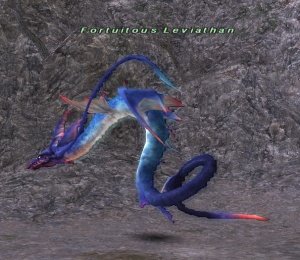 Year of the Snake

There are four NPCs; Fortuitous Leviathan followed by three Summoners, roaming within each of the following zones. The NPCs have large roaming areas, but Wide Scan can be used to track them (they will be at the bottom of the widescan list).

The Summoner NPCs will take any item you trade to them (this includes valuable items, take care) and reward you with one of the items listed below or one of the following spell effects. Repeatedly trading inexpensive, expendable items to the Summoners will eventually net you all available items (it is not necessary to alternate trading to different Summoners or change zones).

Not to be showed up by Leviathan, Gukumatz has temporarily stepped out of Abyssea - Misareaux to roam Valkurm Dunes with some of his Peiste friends and Kukulkan has done the same from Abyssea - Konschtat. Gleeful Gukumatz can be found in Valkurm Dunes and Celebratory Kukulkan can be found in Konschtat Highlands, each celebrating the new year with three of their Jubilant Peiste friends. Trading items to Gleeful Gukumatz or Celebratory Kukulkan will first yield a Galette des Rois if you do not already have one (with different accompanying dialogue as compared to the Summoners), but trading items repeatedly will yield... different results (it may take many trades to obtain Janus Guard).

This mini-quest returns from previous New Year events. To complete this quest you will need a New Year's Gift from Year of the Snake item trading, as well as a sheet of Bast Parchment and two jars of Black Ink.

Each nation has a child NPC (listed above) who will want a New Year's Gift obtained from trading items to the NPCs roaming the field areas. Choose the option "give you something from my pocket" and you will obtain a Battledore which will be necessary for the next portion of the mini-quest. If you choose any other option, you will have to obtain another New Year's Gift to proceed (the other options provide hints for how to proceed in the quest). Repeating the quest after obtaining the Battledore will grant you various fireworks. Using the New Year's Gift on yourself will give various effects depending on the language of the gift's description (see New Year's Gift for details).

For the next portion of the mini-quest you will need to board the Airship, Jeuno - Windurst (in either direction) and find Dilauriome who is standing on the upper floor of the airship. Speak to him with the Battledore equipped and he will request a sheet of Bast Parchment and two jars of Black Ink. Trade him these items to obtain the furnishing item Hoary Spire.