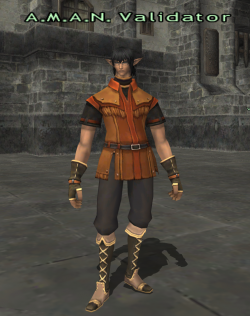 About Deeds of Heroism

Unlike other reward points, Deeds are similar to the Ambuscade category "Total Hallmarks Accumulated". You do not expend them, but rather, you can collect each reward as you earn Deeds.

You may claim rewards from an A.M.A.N. Validator when you have reached the appropriate total Deed threshold.

Before each option in the rewards list, there is an indicator that denotes which rewards are still available and which you have already claimed:

As of the June 2019 Update[1], claimed rewards may be toggled to be hidden or shown.
As of the April 2021 Update[2], the Deed system had its third year's worth of rewards added. Rewards were divided into groups so rewards that require 960 accumulated deeds or lower can no longer be hidden. Now, players are able to reset certain rewards so they can be obtained again, but doing this increases the number of deeds required to reobtain an item previously received. A player cannot reset rewards until they reach 1440 total deeds earned.

Rewards costing 970+ Deeds accumulated are able to be hidden like before. It is unclear at this time how resetting rewards will work.