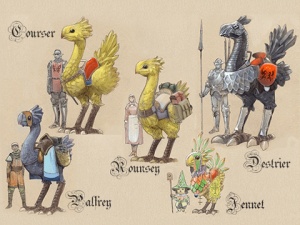 A variety of domesticated avian providing mounted transport across the lands of Vana'diel. A staple of the Final Fantasy games, the chocobos of FFXI come in various sizes and colors, can be rented, raised and owned, and can even be raced and bet on. Throughout the history of Vana'diel, the life of the chocobo has become more and more connected with the five free races. Used in times of peace for transportation and farming, and even in times of war as cavalry mounts, the chocobo has been at the foundation of civilization in Vana'diel for generations.

What is a Chocobo?
Its size and impressive speed make it the most popular type of mount in Vana'diel. Although too small to allow flight, the chocobo's wings assist in keeping balance and also function as a type of brake. A species native to the La Theine Plateau, the wild chocobo were once seen racing across the plains in great numbers. However, as the people of Vana'diel began to realize the utility of this fleet-footed creature, more and more chocobos were captured and domesticated. A truly wild chocobo is now a rare sight to behold. Adventurers mainly use the chocobo as a mount, but there are those who are skilled at using gysahl greens to have the animal dig holes, taking advantage of its natural instinct to bury food.1

For years the yellow chocobo was the standard around Vana'diel, whether in domesticated service or the wild. However, in recent years the rumors of the hatching of colored chocobos have come true, and can now be found being raised by adventurers all across Vana'diel. Common colors include the standard yellow, along with black, blue, green, red, and various hues and shades of the last three. The pinion feathers of the chocobo are generally a lighter shade of the main body feathers.

The Chocobo and Adventurers

The chocobo, along with airships and personal teleportation, is one of the main methods of transportation available to adventurers during their travels in Vana'diel. Most commonly adventurers will be traveling on rental chocobos from the stables at the national capitals or the Duchy of Jeuno. In more outlying regions, chocobos are also available for rental at the Crags of Holla, Dem, and Mea, and more recently available at the Crags of Altep and Yhoat. As well, they are available at some outland towns; rumors abound that even the pirates of Norg keep a small stable of chocobos for the use of adventurers exiting their hideout.
Before an adventurer can mount his or her chocobo they must first possess a Chocobo license. Brutus at the Chocobo Stables in Upper Jeuno can help adventurers acquire a license so long as they are at least level 20. Once an adventurer is in possession of a license they can rent a chocobo so long as they are level 20 when renting from a Crag or Outlands location, and 15 to rent from a national capital's stables or the stables of the Duchy of Jeuno.
Adventurers also have the opportunity to call their very own chocobo in the field. To call a chocobo, an adventurer requires a Chocobo Whistle that is bound to a chocobo they have raised and to be in an area that chocobos can normally be ridden.

When transitioning from an outdoors area to an area where chocobos cannot be used (dungeons or towns), the player will automatically be dismounted.

As of August 26, 20062, adventurers all across Vana'diel have had the opportunity to raise their very own chocobos. Stables in San d'Oria, Bastok, and Windurst are now staffed by members of the Vana'diel Chocobo Society who will help raise your very own personal chocobo. Chocobo eggs can be purchased from Dabih Jajalioh in Ru'Lude Gardens, and adventurers from the Near East report that chocobo eggs can even be found in the aftermath of ISNM battles. Adventurers may also breed chocobos and pass down genetic traits such as colour, abilities, and statistics.