Were you looking for Treasures of Aht Urgan Missions? 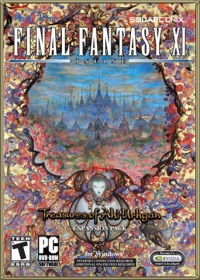 Treasures of Aht Urhgan was first announced the at the 2005 Tokyo Game Show. Besieged and Assault are the main battle content systems added in this expansion.

A lot of controversy surrounded this expansion, as it was only released in the DVD-ROM format on PC. At this time, not many people had a DVD-ROM for their PC. As a result a large number of players had to purchase the game for a registration key and torrent the files, or buy a DVD-ROM drive just to install the game.