Wizened worms are reward items that are randomly obtained by each party member upon using a whistle to end a successful expedition (the number and type(s) obtained are random and independent of performance). There are three types of Wizened worms:

The NPCs Utrig and Sokrov allow players to trade wizened worms obtained from Meeble Burrows expeditions for random items. Wizened worms are not actual items or key items, but they are stored invisibly until utilized.

Note that a maximum of 99 of each type of worm can be stored at once; any quantity obtained beyond that will be lost.

After obtaining a certain number of worms, Utrig or Sokrov will allow you to trade for a random item, chosen from the lists below. Note that the NPCs will not offer any interaction unless you have enough worms to trade for a random item in at least one of the categories. In general, higher value items and rare/ex armor/weapon rewards are much rarer than other potential rewards.

While the majority of the items that can be acquired are obtainable elsewhere, Orc Belt, Quadav Belt, Yagudo Belt, and the four palimpsest items are obtainable exclusively from wizened worm trading.

Wizened Worm trading during the following timeframe will result in rewards chosen from a modified pool, including the return of special costume belts (the Hecteyes Belt, Leech Belt, and Slime Belt), new items like the Mundus Shield, and other super rare items. Special rewards obtainable during this timeframe are shown italicized in the table below, and replace certain awards that are normally available. 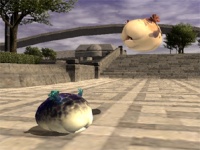 In celebration of the Idyllic Vana’diel Initiative starting on Monday, November 10, the Meebles have procured a variety of exciting rewards, including various chapters of Rem's tale.