To begin raising a chocobo, you must first trade an egg to the appropriate VCS official in one of the three starting nations. Chocobo eggs can be obtained from vendors or battlefields.

Note: you cannot trade another egg to a chocobo trainer once the chocobo raising process has begun. Also, the process of raising a chocobo must be continued in the nation where the egg was traded.

It is also important to note that the time you trade your egg to the trainer NPC immediately starts the timer for Day 1. Time between days is not counted using Japanese Standard Time. If you keep this in mind it can be used to your advantage, for example trading it at a time it is easiest for your schedule to care for your chocobo for two days worth in a row in one sitting.

Chocobo eggs can be obtained in a number of ways. Completing the quest Chocobo on the Loose! will reward you with a chocobo egg. Dabih Jajalioh (F-9) Ru'Lude Gardens sells chocobo eggs if enough people have bought her stock that day to upgrade her shop. ISNM's drop eggs as well. You can also get an egg from Finbarr (G-7) Upper Jeuno after successfully mating two chocobo's.

There are five different types of eggs, each having a different warmth to them. The differences between eggs is unknown.

*There are new NPCs in the chocobo stables known as “chocoguys” who will help you understand the process of chocobo raising.

From The Egg to A Chocobo 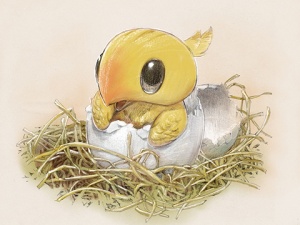 The process of raising a chocobo from egg, to chick, to adolescent, to adult will take approximately one month. Adventurers will work with a VCS chocobo trainer to care for their chocobo. The attributes of a fully grown chocobo will depend on the treatment it receives during this time.

Once the egg hatches, you will be able to choose from several care plans that will affect the development of your chocobo. Care plans allow you to have the most control over your bird's development. Care plans are non-interactive, but you will be briefed on their success/failure by the VCS official once every 24 hours. 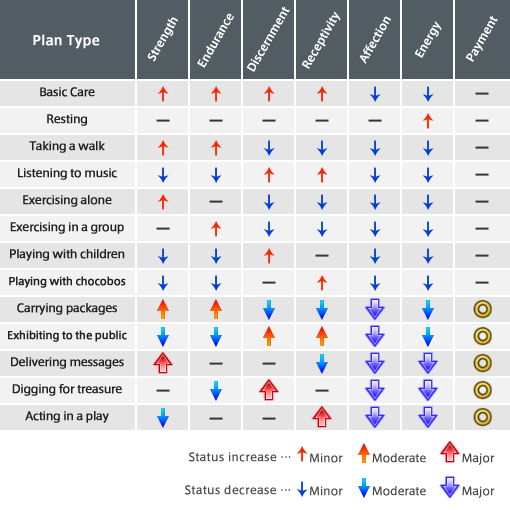 Note: Not all care plans are available when a chick hatches.

Note: It is highly advised to never use the Rest care plan. This has been known to cause glitch in the game where your chocobo will ignore all future care plans and do nothing but sleep.

Setting Up A Care Plan 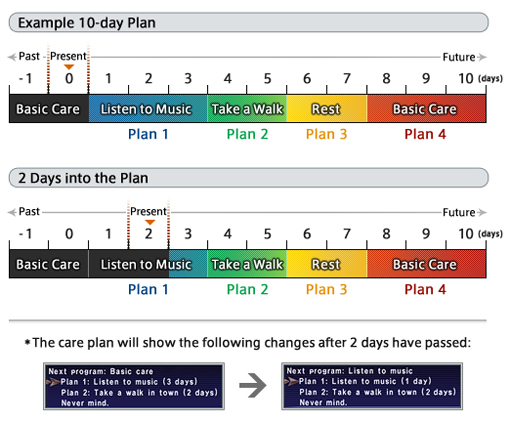 The following outlines the process to modify care plans:

The chart on the right is an example of a 10 day plan which consist of:

Visiting your chocobo and caring for it directly will create bonds of affection that cannot be replaced by even the most detailed care plan. It is not strictly necessary to provide this level of dedication; however, your loving attention will have a noticeable effect on your chocobo’s development. It is also possible to cure your chocobo of several different status ailments with direct care.

Every time you use a care option the bond between you and your chocobo will strengthen, but there is a limit to how often you can care for your bird. Caring for your chocobo will deplete some of its energy. That energy will refill once every 24 hours after being fed. Some care options require more work for the chocobo and will deplete its energy faster, but they have the benefit of increasing your bond more.

While still inside the egg, the only interaction you are allowed to have with your egg is to watch over it. This used to affect how much affection the chocobo had for you when it hatched: at least 100 times to reach maximum affection! As of Aug 2016, chocobos always hatch with max affection. Eggs will never run out of energy. The other care options unlock as your chocobo matures. At birth, you are limited to watching over your bird and taking it out on short walks. In adolescence, you can tell your bird a story (teaches abilities), scold it (cures stubbornness), race it (cures boredom), and regular walks. All care options unlock when your bird becomes an adult.

Abilities act like job traits for your chocobo. To teach your bird an ability, you must first obtain a story (key item). After you have a story, tell it too your chocobo using the "Tell A Story" option. Chances for your chocobo to learn from the story are small, but with repeated readings and increased Discernment your bird may eventually be inspired by your words.

Raising a chocobo is not always an easy process. Occasionally, your bird will be afflicted with one or more conditions. Most of these are negative, but some are positive. You will want to fix the negative conditions as soon as possible. 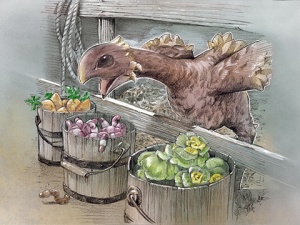 Like every living thing, chocobos need food to survive. VCS trainers will provide your bird with the most basic of feed, but it is often not enough to fill your bird up. Chocobos can be fed a variety greens, carrots, medicines, and even a few potions. Each type of food has a different effect on your chocobo.

Pastes are specially designed for baby chocobos. They are very effective at filling up chicks, but as the chocobo ages they become much less filling.

Chocobos do not like the taste of medicines, but they are needed to help your chocobo recover quickly from illness and injury.

Worms are used help raise affection and energy dramatically when they are falling dangerously low, but they have the side effect of lowering attributes.

Your chocobo's appearance will alter as it grows. The care plans you select while raising your chocobo greatly affect portions of its appearance.

Chocobos have 4 main attributes; 2 of which are physical and the other 2 are mental. The care plans you select for your bird have a big impact on which attributes are raised/lowered. 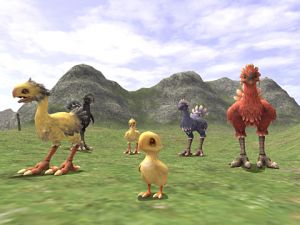 When your bird reaches adolescence (Day 19), the tips of its tailfeathers will change color to reflect what color the bird will be at adulthood (Day 29).

It is still unknown exactly how a chocobo's color is determined, but it is thought to be inherited from its parents. Along with gaining its adult plumage at day 29, your chocobo's physical appearance will alter depending on its dominant attributes. Any attribute at 'Average' or above will trigger the physical change.

Discernment: Enlarged beak, as will the feathers on its head.

Another way to improve your chocobo's abilities is through chocobucks. Chocobucks can be earned through Chocobo Racing and the Chocobo Hot and Cold Game. 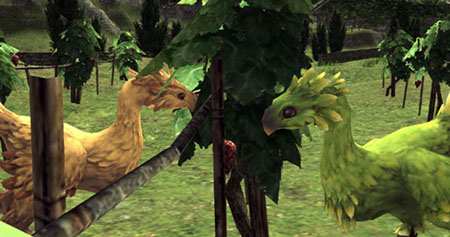 Once your chocobo reaches adulthood (day 29), you will be able to mate it with other chocobos. To mate you will need to trade the following items to the NPC Finbarr (G-7) located in Upper Jeuno:

There are four types of Honeymoon Plans you can send the chocobos on:

Speak to Finbarr again after midnight has passed in Japan and he will give you your chocobo egg.

The VCS has dispatched six new journeymen trainers to the chocobo stables in each of the three nations of Bastok, San d’Oria, and Windurst. Three are in charge of Kamp Kweh operations, while the other three run the Chocobo Hot and Cold Game.

Calling Your Chocobo In The Field

To be able to ride your chocobo, you must select the "Register to call your chocobo" option when speaking to a VCS trainer. You must also have completed the Chocobo Whistle Quest to be able to get the item. You will not have to repeat this quest for subsequent chocobos. If your whistle runs out of charges, trade it back to the VCS trainer who will recharge it for 10k gil. The VCS Trainer can replace a lost Chocobo Whistle for 20k.

By trading the chocobo whistle to Mapitoto in Upper Jeuno, you can call your chocobo from the mount menu or with the "/mount chocobo" command.

Rental chocobos are bred for speed and endurance, so they are automatically at the capped mount speed (+100% of base movement speed) and riding time. Personal chocobos will need the highest Speed rating and the ability Gallop in order to move at the same speed.

The following values were verified using the TargetInfo addon on chocobos at various speed ratings.

If you let your chocobo's affection for you drop too much, it can run away from the stables. During the time the bird is away, your bird will be unable to preform any care plans and you will not be able to interact with it until it returns. The duration the bird runs away for is random, if its affection continues to drop it may run away for longer periods of time. It is rather difficult to make chocobos run away, but it will happen if you ignore your bird for long periods of time.

Once your chocobo reaches adulthood (day 29), you are given the option to retire it. After confirming your decision, you are shown a brief cutscene illustrating some memorable points in your chocobo's development. The VCS trainer will present you with a plaque for you to put in your moghouse. This commemorative plaque proves that the Vana'diel Chocobo Society officially recognizes you as a chocobo breeder. The plaque color will be the same color as your bird. If you have not retired your bird by day 129, the VCS trainer will do it for you. Once you retire your chocobo you are no longer able to interact with it through the VCS trainer. This means you can no longer schedule care plans or care for your chocobo. You will still be able to call your bird into the field, race your bird, and mate you bird with others. It is highly recommended that you obtain all documentation on your bird you will need for it if you ever wish to recharge the whistle, race, or mate again. The At this point you will be able to trade another egg to the trainer and begin a new chocobo.

The following 49 pages are in this category, out of 49 total.