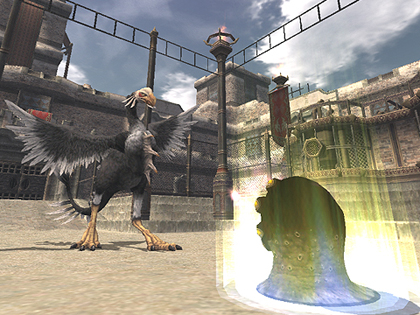 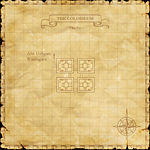 Map of the Pit

Pankration, also known as The Pit, is a system in which players can capture images of monsters in Vana'diel, customize them with traits from other monsters, and compete against each other with these monsters. Monsters will gain Experience Points from battling opponents and can level up. The current level cap is 50. Players use Jettons, a type of currency used exclusively for Pankration, to purchase the necessary soultrapper and soul plates. Soul plates with monster images on them can be used to make a Soul Reflector, that holds a monster to pit against others, or imbue the Feral Skill imprinted on it to another Soul Reflector. Pankration was added in September 2007 and requires the Treasures of Aht Urhgan expansion and access to Aht Urhgan.

Pankration is located in the "The Pit" map of The Colosseum. A 10% bazaar tax is present.

Using a Soultrapper to Feral Drain monsters allows players to obtain Soul Plates to be used in Pankration. It requires minimal to no gil, but some Imperial Standing will be required. Feral Drain produces no enmity, making it easy for low leveled players to capture images of many unaggressive monsters.

Items necessary for soultrapping can be bought from Zandjarl, a pit vendor.

Jettons are required to purchase his merchandise. Imperial currency can be exchanged for Jettons by Zandjarl. Jettons can also be earned from competing in the pit.

Aside from reuse timer and number of charges, there is no documented difference between Soultrapper and Soultrapper 2000

Much like soultrappers, which type of soul plate a player uses appears to have no effect on which Feral Skill is present on the plate

The Beastmen Headpieces give a large visible increase of the success rate of feral drain against a specific monster species. It is not known if they have an effect on which Feral Skills are present on the plate

Feral Drain requires a player equipped with a Soultrapper or Soultrapper 2000 in their Ranged slot and have blank Soul Plates or High speed soul plates in their Ammo slot. Once this requirement has been fulfilled, players can snap pictures to imprinted on the Soul plates. This is done by using the Soultrapper like any other Enchantment item. The maximum range of Feral Drain is 10'. Sneak (Status), Invisible (Status), or Deodorize can not be on or the enchantment will not load.

Using Feral Drain adds no enmity and does not cause monsters to attack players. Because of this, it does not claim monsters and can be used on monsters claimed by other people or parties.

Feral Drain is not a ranged attack. It can not be used by commands that activate ranged attack, such as /ra. No abilities, traits, attributes, and skill effects Feral Drain.

Feral Draining higher level aggressive monsters is considered dangerous without planning to fight or sleep or bind the monster. Monsters that aggro to sound will attack players once they come within 10' without Sneak in effect. Monsters that aggro sight will aggro players if they turn and face them.

Feral Drain results seem to increase greatly when the player is facing them and uses Feral Drain from a very close distance.

Soul plates can either be converted into Soul reflectors and have the monster be used in the Pit or the Feral Skill on it can be used on a Soul reflector to modify that monster.

Pankration monsters can be named using a choice of two words out of two separated lists.

The Soul Reflector forgers Abhrem(located at Annihilation), Idjham(located at Bloodlust), Biwhal(located at Carnage), and Whashai(located at Diablo) are important for creating soul reflectors, information on Feral Skills, and adding Feral Skills to Pankration Monsters.

The Official Reflector screeners Kadjayhal(located at Annihilation), Ghalizham(located at Bloodlust), Wharoub(located at Carnage), and Zhashdi(located at Diablo) are important for turning a soul reflector into a player's Official Soul Reflector.

Pankration Monsters are the central focus on Pankration. Their exact attributes are hidden from the player, but do vary between families. This is reflected in the FP totals, which also also differs between monster families. Often, weaker monsters such as Chigoe have high FP and stronger monsters such as Corse will have lower.

Most monsters will have most of their natural TP moves available without leveling up. Which they use will be based on their temperament or the commands you give them.

All monsters retain their killer effects, strength and weakness.

There are 65 available monster families. This does not count subfamilies, such as Eruca.

All Pankration Monsters begin with the name "Pit Monster". This can be changed by trading a Soul reflector to a Soul Reflector forger.

Monsters who have been signed up for a match can not have their name changed.

Feral Points limits the number of Feral Skills and which Feral Skills a monster will be able to equip. Starting FP and the rate it increases differs between monster families.

Some monsters are prohibited from participating as Pankration Monsters and their soul plates can only be used for adding Feral skills. This is especially true for Beastmen, which are often the more consistent source for job, subjob, job trait, and spell related soul plates.

Monsters can be equipped with Feral Skills to gain access to special traits. These traits vary greatly in their FP cost and what they grant monsters. They are all based on current job traits or monster traits.

It is possible to remove a Feral Skill as well. Removing Feral Skills requires trading a Soul Reflector and choosing to have one removed. Once a Feral Skill is removed, a new soul plate is required to add it again.

Discipline ranges from low to... Monsters with low or ... Discipline will ignore...

Temperament determines the AI of the monster. What a Pankration Monster does in battle without commands is entirely based on temperament. Temperament begins completely random and can be adjusted through specific commands.

There are two parallel ranges of temperament: Aggressive vs Defensive and Tame vs Wild. A monster can be combination of these two. Discipline has no effect on temperament.

Pankration has arenas where players can pit their Pankration monsters against each other in combat. Players can give commands that have certain effects on monsters, like using a specific TP move or a special tactic, and over time will change its Temperament. Players are not required to give commands and do not have to be present for their monster to fair well.

Players can give commands from the commanding platform using the Speaking Tubes while it is their monster's turn to battle. The platform is only accessible during matches the player is taking part in.

Pankration battles follow special rules not present in normal battles. When a monster is attacked while asleep, it has a Critical Hit effect. A similar and stacking effect is given to attacks that hit from the side or behind(

). TP Moves can always be lowered in damage by the target moving to the side, much like Breath attacks.

In exhibition cages, players are paired in the order that they signed up. It is also possible to reserve a spot for party members. This spot lasts for 5 minutes(

) and can be canceled by the reserver canceling his application. The maximum waiting time for the exhibition cages is 42 minutes with a maximum queue limit at 28 players.

In tournament matches focus around multiple monsters challenging the champion until it is dethroned. Matches are only against the champion so there can be no reservations. The maximum waiting time for the tournament cage is 84(

) minutes with a maximum queue limit at 28 players.

When there is no player opponent ready, a computer Pankration monster with a random name and temperament will be created to face a player's monster.

Matches can be watched by people who are not participating simply by standing on the elevated stage in front of the battlecage. Clicking on the Cage Fence will allow players to view the match from specific angles.

Once a match ends in victory or defeat, both monsters are awarded experience points and both players are awarded jettons by trading their Soul Reflector to the Pankration Registration officer. The amount that is rewarded is based on level difference. The maximum limit of exp gain is 200, but can increased to a cap of 2000 in the Diablo Cage. The minimum amount is 5. The amount of Jettons rewarded to players is always the same as exp, but has no known cap and will continue to climb after 2000.

When a match results in a draw, only half of the normal reward is given.

There are four Battle cages present in the Pit. Each share the same set of Pankration-related NPCs in the same positions, with the exception of Annihilation where Zandjarl the Pit Merchant is also located. Annihilation, Bloodlust, and Carnage are exhibition cages and Diablo is the sole tournament cage.