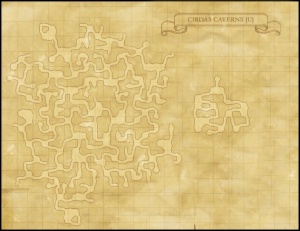 Entry into Fractures for Delve is accomplished by having the alliance leader utilize a Yantric planchette key item at one of the Veils located in Ulbuka field areas. Reference the Delve page for more information.

Entry into Cirdas Caverns (U) skirmishes is accomplished by having the party leader utilize a Cirdas simulacrum (assembled from three Simulacrum Segments including a Cirdas Visage) at the Augural Conveyor located in Cirdas Caverns at (H-3). All players in the party will be immediately transported to the Skirmish area once entry has been confirmed by the party leader.

There are five Skirmishes that occur within Cirdas Caverns (U), dependent on the tier of Faithful's Torso used in assembling the simulacrum. Each Skirmish will begin at the same location on the overall map, but take place on progressively larger versions of the map. Monsters in Cirdas skirmishes are initially found alone or in pairs, and spawn a number of assisting monsters (2-6) either when aggroed or when defeated. In total, between initially present monsters and adds which can spawn, the largest map (on a tier V body run) contains 100 monsters. All monsters will have significantly reduced HP but otherwise similar stats and attributes to Very Tough monsters found elsewhere. Smaller maps contain fewer monsters. In map sections that are common to different size Skirmishes, shared enemies and potential Noetic Ascension locations will be located in the same positions.