In solo situations, Puppetmaster plays like a generic DD, and allows the pet to fill whatever role is needed. For example, during Salvage, a Puppetmaster will probably go /WAR or /DNC, and use your Stormwaker puppet for heals and haste 2. In a Capacity Points party, go /WAR and let the pet go as a Sharpshot, and use a tank trust.

In CP parties with other people:

In the end game, the most common role for pup is to use their pet to tank. This is due to pets -87.5% pdt cap that can easily be gotten with Armor Plate IV, Optic Fiber and Optic Fiber II, as well as a few pieces of gear. This allows the master to stack regen, acc/atk/crit/DA and other items on the remaining slots. PUP tanking excels in situations where there is only 1 monster, or the additional monsters hate is tied to the main. It has very poor AoE hate grabbing potential.

With proper buffs (Corsair), Sharpshot pet can also churn out very similar or greater damage to that of a Beastmaster.

A puppetmaster should always be familiar with the array of Attachments at their disposal.

While Puppetmaster is not an actual or traditional tank, it can excel at holding an enemy or being a way around mechanics like Charm or Death. The big advantage to PUP tanks is the high and easily obtainable PDT cap of 87.5%. As well as access to Shell V should you choose to use the very niche setup of the Harlequin Frame. There is a 'generic' tank setup, but it will vary per monster, and knowing how/why to use specific attachments will determine how effective of a tank you have.

From here it is all really dependent on the monster you are fight. The best example would be comparing a solo CP party to a group Ambuscade. In solo CP parties you can skill chain with your pet, so Inhibitors/Speedloaders are invaluable and can let you 4 step solo skill chain for double light and do 50k. If you do an Ambuscade party where 3 blue mages are spamming weapon skills non-stop, you actually don't want to use Inhibitors/Speedloaders. The reason being, is they cause the pet to hold TP and wait until it can close a weapon skill. This means your pet will basically never weapon skill, and loses a lot of DD/Enmity. This example is also true in events like Wild-Keepers where it is considered 1 big party. Since weapon skills will be going off non-stop, your pet will never weapon skill.

Things to remember when tanking:

The equipment section below will cover essential gear for tanking, as well as example attachment sets for different JP levels (0/100/1200).

See the Puppetmaster page for a full list of abilities/traits.

The abilities you will use the most are 'maneuvers'. They fundamentally affect not only the stats of the automaton (offering a raw +X to their aligned stat), but also how they behave and trigger certain attachments. They can control which Weapon Skill is used, what spells to prioritize, and how large of a bonus you receive from equipped attachments. However, they come at a cost.
There is an invisible burden tied to using maneuvers. If the burden gets too high, you will overload, and have a gimped pet. There is gear to increase the threshold of burden needed before an overload, attachments to increase how fast burden is reduced, and a mythic weapon that cuts the amount of burden generated. There is also Cooldown, which can be further augmented with Job points to reduce current burden/remove overloads.

The duration of maneuvers can be extended from 1 minute up to 5 minutes. The longer a pet remains deployed, the longer a maneuver will last. This is beneficial for zones like Escha, where you can send your pet out to solo for a bit. Then when you go to engage a Notorious Monster, you will have a pet with 5 minute maneuvers, which means less micromanaging, and no chance of overloading. Since burden decays on a set amount per unit time, the longer you go in between maneuvers, the less likely you are to overload.

When setting attachments, it is very important to consider 'What maneuvers am I most likely to use with this setup'. Setting Attuner on a mage pet, that isn't using fire maneuvers will have little affect and just uses up a slot.

This is the highest damage option for sub jobs. However, it lacks Invisible, Sneak, and healing, and as such is only viable when you have reliable healing or are fighting a monster with no Area of affect moves/spells/abilities.

This is one of the more practical subs. It offers sufficient utility, as well as healing should you be doing an event where trusts are not allowed or your pet can't be relied on to heal.

For enemies with elemental area of effect spells that would wipe shadows, Runefencer is a solid option, because it allows you to resist a spell that would go through a shadow.

For enemies with area of effect spells that don't wipe shadows. This also offers sneak and invisible.

Mostly used as a niche sub job, for the sole benefit of generating large amounts of enmity, and then transferring it to the automaton.

Mage sub jobs are still an option since Puppetmaster shares a lot of gear with mages. In recent content, the amount of end game mage gear for Puppetmaster has been slowly decreasing, and as such, Puppetmaster is becoming less and less viable with mage support jobs. 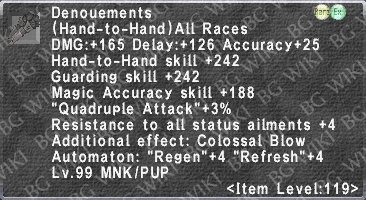 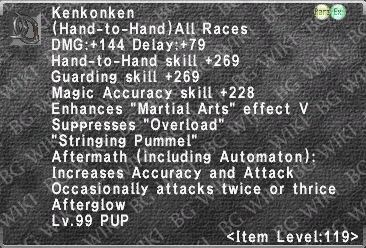 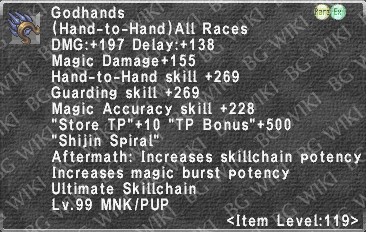 Gear for...STR, crit rate, and crit damage, you could do STR and VIT, but mostly its just STR again since it will most likely line up with your victory smite set.

Other options: Nibiru path D gives 10% more Repair regen and bonus skill to shield block. If PDT isn't needed you can swap out Handler's Earring +1 for other pet options. Pretty much all of Rao can be substituted for Taeon with -DT. The Anwig can also be replaced if there is no magical damage since you will likely cap PDT without it. Obviouslly, if you dont need MDT, you can swap out items like the belt, for better belts with more acc/atk/DA etc.

Notes: All herc pieces need to have +store tp. Ideal stats would be Acc/rng acc+30, store tp+10, crit/double attack+3. Some alternatives would be swapping Burana for Riemece. The goal here is to get your pet down to a 3 hit build to spam Accubalista (or Bonecrusher during overdrive). Also, if you use Thurandaut Ring, you can drop the Klouskap Sash +1 for Incarnation sash.

All pieces must be augmented with max + store tp. Incarnation sash is a solid option as well.

Not intended to be a list of all attachments, more of a description of why/when to use them/not use them. As well as some sample attachment sets.

Here is a list of how optic fiber affects other attachments, its not 100% complete but please comment on the discussion page any further changes. Optic Fiber - Google sheet

Ideal for level 1 to 99 pups. Pet will chase mobs, and skill chain when possible. Not good for WKR since inhibitor/speedloader will make pet hoard TP. If your pet is not going to take any damage, suggest replacing AP4 with XYZ. The different maneuver patterns are to keep fresh pups from overloading as often.

This is my build for the gnole ambuscade, but it works as a decent base for several different tank builds. The key here is no inhibitors or speedloaders so it will WS as often as possible to try and keep up with the DDs spaming.

This is the build for the frog ambuscade (via FFXIAH). Without overdrive, pet will lose hate constantly and frog will chase the master. To avoid this, either overdrive or use a strobe to replace coiler II. Another alternative, is to use a Sharpshot head with valoredge frame. This makes heady artifice use mighty strikes since the frame cant use range attacks (thus locking out eagle eye shot).

This is for apex crawler/apex bats, solo with trusts. This pet will skill chain with you and do some massive skillchains if you do 3-4 steps. Shijin -> pet -> VW -> pet is 4 step light for 25k+ light. Last 3 slots are blank. Use an Attuner if you fight bats (they use atk down) or just use tension springs for crawlers. I use Coiler 1 and 2 for additional double attack as needed to make sure pet builds tp as fast as me. This build focuses on 4 step skill chains over the raw damage of Arcuballista.