Level 1 Skillchains have a single elemental property and always are composed of that element's damage. Level 2, 3, and 4 skillchains are composed of multiple elements and have the potential to be any one of them. For instance, Fusion can be either light or fire elemental damage, and would be affected by Korin Obi or Karin Obi, respectively. Skillchains do elemental damage of the element the monster has the lowest resistance rank in, which can be affected by things like Rayke. If multiple elements in the skillchain tie for the lowest rank of the target, it defaults to the first option in the following priority order:

This is particularly relevant when it comes to Elemental Obis, which can be used to force day/weather bonuses to apply to your skillchains. For instance, Hyorin Obi worn on a 2000 damage Weapon Skill to close a 2-step Darkness skillchain when it deals ice damage on iceday would another 200+ damage to the skillchain, which may be better a better increase in total damage than you can get from another belt in that situation. 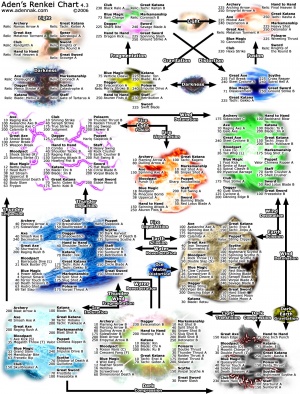 During the magic burst window of a skillchain, the target's resistance ranks for every element composing the skillchain are lowered by one stage. As such, monsters are less resistant to the matching elemental magical effects of all kinds during this window, even ones that cannot Magic Burst.

This effect resets with each successive skillchain.