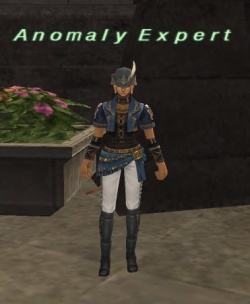 Upon trading an "Yggrete Rock" to the Anomaly Expert, she will synthesize the rock into one of three "Yantric Planchette"

key items which allow the bearer to enter their alliance into the corresponding Delve fractures.

After obtaining the first three Delve boss key items (Craggy fin, Flame-scarred skull, Detached stinger), speaking with the Anomaly Expert will allow you to expend all three for one piece of Delve boss or NM equipment, an Airlixir +1, or an Airlixir +2 at random. Obtaining all three again will allow you to repeat the process. Boss items can still be purchased from Forri-Porri for plasm even after expending the key items through this process.

Interestingly, if you look closely, for unknown reasons, her character model is actually a Mithra Mannequin.