There are two Moogles used for this event.

The first moogles show your classic character statistics. After receiving your special items, you can obtain another less valuable item every Earth day. Players are given the option of "Waiting for a better present", but there has not been any conclusive evidence that this has proven useful.

These moogles are located at:

To begin the event portion, speak to a Moogle in one of the three nations at the following locations:

Upon speaking to a Moogle, you will be rewarded with a

Cornelia Statue. You will also be given an introduction to the event itself. 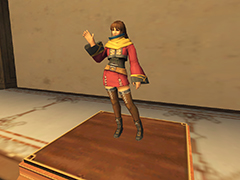 Next to each Moogle sits a red Treasure Chest. Inside are rewards from all of the past Anniversary events.

The battle itself takes place at the following locations:

Head out to an area above and receive Moogle Magic to receive a Level Cap status of level 5. You will then be able to fight the event monsters.

The points earned while fighting are called Tiptrus Points.

There are three types of points to accumulate, and all three contribute to your total:

Additionally, there are a total of six waves in each battle:

The idea for maximum points is to exploit the bonuses. Earning these in the first phase(s) will benefit you in the following phases.

Your first goal is to earn 10,000 Tiptrus Points over the course of multiple battles. You will finish Participation mode at that point, and a chest will appear with your reward.

Your Tiptrus Points will reset, and you will now have access to Premium Mode.