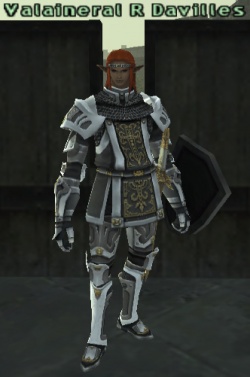 Great Figures of the Crystal War

General of the Royal Guards under the Kingdom of San d'Oria, hailing from Aldiaine. First cousin to the current king, Destin R D'Oraguille. Known for a gentle and sincere demeanor which belies his unrivaled skill with a blade and well-versed knowledge of military affairs. Admired by the masses for his resemblance to the benevolent Ranperre R D'Oraguille, and likely heir to his legacy.

For these reasons Valaineral was held in high regard by the people, his debonair good looks and air of honorability currying him greater favor than then-Crown Prince Destin, who had not yet developed his penchant for public speaking and social grandeur. And so it was that the citizenry attempted to champion Valaineral as successor to the throne upon the unfortunate assassination of King Grantieul R D'Oraguille. But, unwilling to plunge the kingdom into yet another political schism, he at once made known his loyalties to the Crown Prince, his shrewd maneuvering promptly stifling any machinations set in motion by his supporting factions.

Thus gaining the unflinching trust of King Destin, Valaineral was bestowed the eminent title of duke in 858, and charged with the command of the Royal Guard. He hence proceeded to devote himself wholeheartedly to the defense of the kingdom. With the onset of the Crystal War, he chose to personally marshal the royal banner of San d'Oria on the battlefield to inspire the hearts of the troops. Even now, he remains in the field, in the makeshift encampments of the men, making his bed on San d'Oria's wild grasses.