Were you looking for Adventurer Campaigns?

In order to participate in Campaign, complete the Mission Back to the Beginning to align yourself with one of the nations. Select carefully and it is recommended to join the allied force of your home nation to reap the maximum benefits of your service for both you and your nation.

This section needs to be triple-checked for additional rules/penalties as no extensive testing has been done.

How Campaign Plays Out

Tally results from the previous week* are used to determine battle strategies and logistics for the current week.

Following predetermined policy, players engage in Campaign battles, Campaign Ops, etc. with the aim of expanding their nation’s territorial holdings. Teleportation services to areas where Campaign battles are underway are available via NPC.

Polling is conducted in each nation concerning the implemented military policy.

Steps 1 and 2 are repeated for a period of one week (Earth time) before moving on to Step 3.

Once per week, the tactical assessment results and completion rates of Campaign missions will be tallied to determine the following week’s battle strategies. Once these strategies are implemented, the cycle returns to Step 1.
Campaign tallies happen every Monday after Japan Midnight (similar to Conquest on Sundays) 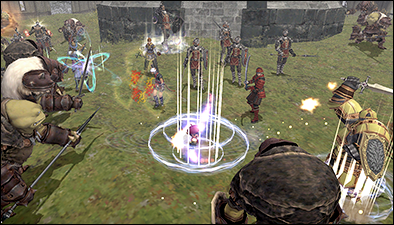 “Campaign Battles” refers to those conflicts being waged in the designated areas of certain regions. Ceaselessly contested, it is only by repelling the incessant onslaughts of the Beastman Confederate that the Allied Forces of Altana can hope to lay claim to these lands once and for all. By being issued “Allied Tags” by Campaign Arbiters, players may opt to have their battle performances assessed, in return for which they may be rewarded with experience points and “Allied Notes,” a form of Campaign points. In addition, players felled in Campaign battles will suffer no loss of experience.

Lesser in scope than the large battles waged over the control of lands, Campaign Ops refer to those special operations that afford players the opportunity to engage in a plethora of war-related efforts, including troop reinforcement, supply runs, escorts, reconnaissance, espionage, and small-scale skirmishes. The Campaign Ops available for participation will vary depending on factors such as regional influence and war conditions. Most importantly, the war effort of the Allied Forces of Altana stands to benefit greatly from the successful completion of such endeavors. Campaign Ops may be undertaken by speaking to the appropriate NPC in any of the three nations.

Repercussions in the Present

The actions and conduct of players in the past will come to have a direct role in influencing the trajectory that Vana’diel takes into the present. One such example is the dispersal patterns of monsters and beasts.

The military of each nation under the Allied Forces of Altana may receive what are known as Campaign “medals.”

While donning a medal, the merit of a player’s performance will be judged by that nation’s Campaign Evaluation Official. These officials will take the following points into consideration when doling out their evaluations:
・Individual conduct in Campaign battle
・Campaign Ops achievements (including the assistance of other PCs)

Amassing medals will grant a player ever-increasing prestige amongst the forces of the army with which they are affiliated. In addition, higher-level Campaign Ops will be made available, and the player’s voice will come to carry more weight when carrying out tactical assessments.

Campaign evaluations are possible only 120 hours, 5 days, (Earth time) after either army enlistment, transfer, or since the player’s last evaluation.
・If you have obtained the Rhapsody in Mauve, evalution periods are reduced to 1 Earth hour.

Campaign Evaluation Officers are authorized to hand down the following three judgments:

The player will be bestowed an additional medal. The evaluation record will be reset.

The player’s current rank remains the most befitting. The player’s evaluation score will be reset.

Due to not generating a satisfactory evaluation, the player will be stripped of one rank. Upon being demoted, the player’s evaluation score will be halved. This can be prevented through progress in the nation's quest branch of the Wings of the Goddess missions.

Every medal is imbued with a magic that determines its period of validity. This term is set at thirty days (Earth time), after which point Campaign services dependent on that medal’s validity will become inaccessible.

To renew a medal’s validity players must consult the Campaign Evaluation Officer in their nation of affiliation, who will consult them on how to proceed.

The following NPCs are in charge of assessing medals:

For adventurers entering into a pact of service with the Allied Forces, the Sigil effect may be acquired by speaking with an Allied Officer. A variety of beneficial effects may be added to the Sigil at the cost of some Allied Notes to the player. There are some instances where defeating a monster while bestowed with Sigil will result in the dropping of crystals.

Allied Notes: Displays the number of Allied Notes, a form of Campaign points, you currently possess.

Stronghold Details: Placing the cursor over any stronghold will display the following detailed information:

Area Details: Placing the cursor over any of the areas represented by a point on the map will display the following area details.

(1) Dominant Force: The icon of the army with the most influence over an area is displayed. (2) Fortifications: Numerical representation of an area’s defenses. This rating is influenced by factors such as the number of soldiers participating in that area’s battles, etc. (3) Resources: Numerical representation of an area’s resources. This rating is influenced by such factors as the number of temporary items available. (4) Influence: Graphical representations of each of the three nations’ influence over an area, as well as the Beastman Confederate’s.

War Conditions: Speaking to specific NPCs in the city areas will allow a player to view current military policy in place.

In each nation, tactical assessments of military policy may be conducted. By speaking to the appropriate NPC (curate in San d’Oria, supply commander in Bastok, or ｍorale manager in Windurst) players may participate in such an assessment on any of three categories: leaders, battle strategies, and internal policies.

The tallied results of all assessments will be calculated in Campaign totals, and after taking into the consideration the opinions of the nation’s elite, will be reflected in the policy decision-making of the following week. Players affiliated with an army have the right to participate in that force’s tactical assessments once per week.