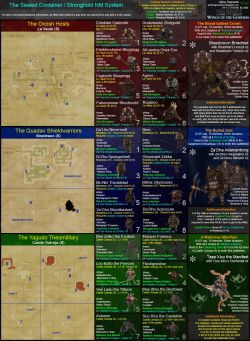 Invading Campaign strongholds is an opportunity for players to decrease the strength of the Beastmen Confederate's forces, increase the strength of their own nation, as well as obtaining special items and equipment. Defeating challenging Notorious Monsters is the task, with the ultimate goal of defeating the special Battlefield in the end. Throughout the three stronghold areas, there are 8 different NM's, each one corresponds to a Campaign statistic; funds, resources, supplies, reconnaissance, skill, production, morale, and prosperity. When defeated, they will always drop their sealed container, and have a chance to drop equipment. The containers are rare/exclusive and can be traded in for a key item. Trading in containers will also increase one of the nation's statistics.

All of the NM's seem to have a respawn time of roughly 4~6 hours.

Once the 8 key items from a stronghold have been obtained, players will be able to enter a battlefield within the stronghold. That battlefield can reward more equipment.

Once you've recieved a sealed container from the NM, return to the appropriate nation. Trade it to one of the following NPC's for the key item:

The BCNM entrances to these areas are as follows:

All enemies are immune to sleep. Bloodcrown uses a very long ranged AoE knockback+Amnesia+Hate reset. It is able to enfeeble anyone within close range with permanent Flash. Uses Invincible multiple times.

Important Note: Be aware that passage into the farthest North East areas of Beadeaux (S) require one person to have a Quadav Charm to pass through the door at (I-9). It can be obtained from De'Vyu Headhunter in present day Beadeaux. 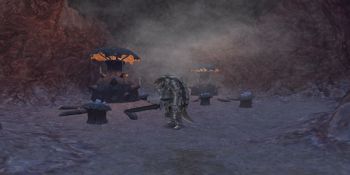 All enemies are immune to sleep. It is able to enfeeble anyone within close range with permanent Slow. Ore Lob TP attack is conal and clears shadows. Has an inherent Enstone effect. \