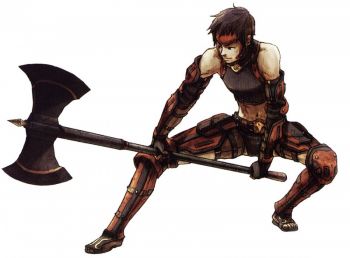 Warrior is one of the premier damage-dealing jobs, with access to a huge array of weapon types and supporting armor. It also has the tools to function as a back-up tank when the need arises. In the current endgame landscape, Warrior's spectrum of damage types and options on how to use those weapons is often sought after for Odyssey. In other content like Ambuscade, Dynamis - Divergence, Escha, and Omen; Warrior's strong Weapon Skill output and ability to skillchain with any job makes it a favorite among players. Warrior is an evergreen popular damage dealer in nearly every type of content, making it a great job to take up.

Warrior's sets are quite interesting with the artifact armor buffing key job abilities and being great for the times you need a full accuracy set for TP. Relic is more expensive and also more niche option with the most potential for new/returning players that are looking to play with dual wield or Fencer builds, and empyrean is the odd one of the bunch, being not only incomplete at +1 instead of +3 but being generally not a preferred choice outside of macro pieces or ukonvasara use. That said this is just an opinion section and you should definitely make your own choices on what to upgrade and which pieces to focus on is entirely arguable depending on content you're doing or accessibility of other gear choices. If you literally have no idea what warrior is all about this could be a starting point to hit things (written mainly with a Great Axe in mind).

Warrior can use a wide variety of weapon types quite well, allowing you to take advantage of an enemy's weakness and work around their strengths. While leveling, stick to Great Axes and just try to upgrade your weapon every 5-10 levels to increase your DPS. We'll be focusing on gear for level 99 and beyond in this guide.

The Great Axe is Warrior's bread and butter. It is your primary weapon when skillchaining matters and also features the Break line of weaponskills that weaken the enemy.

- Babby's first Great Axe if you haven't been to Adoulin yet, otherwise skip to a weapon below. Purchased from a Sparks NPC.

- Newer players only. As soon as you can raise enough Bayld and get to Adoulin, make your way to the Peacekeepers' Coalition in Eastern Adoulin where Craggy Bluff is to buy this. You can convert previously gained Copper Vouchers to at least 3,000 Bayld in order to buy this swiftly. You probably want some of the Gorney_Armor_Set_+1 from Vesca as well, so raise 12,100 Bayld if this applies to you.

- Obtained from Oboro and will require some resources to put together and augment, where it becomes a more significant upgrade from the Homestead Labrys. It is entirely possible (and preferable) to skip this one by doing lower tier Ambuscade or qualifying to use the Hepatizon Axe, but I'll leave it here for the time being for those operating at a different pace. 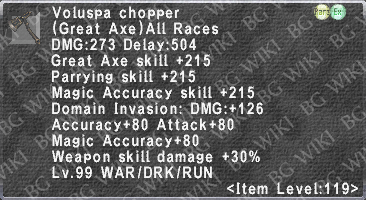 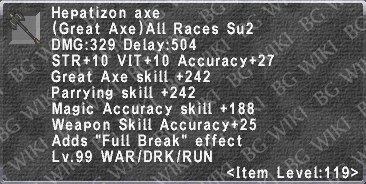 - If you have more Job Points than you know what to do with, but have yet somehow avoided Ambuscade, this or the HQ version of it is a nice pick up until you advance through some of the Lycurgos stages. Note that this is a su2 piece of equipment, which requires 100 Job Points spent for Warrior. 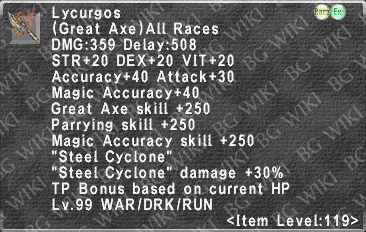 - More established players can start here. The final form of the Ambuscade Great Axe. Note that you can probably upgrade from the an earlier weapon once it's this weapon is at Ajja Chopper stage. At the time of this writing, you can use this Great Axe until you make one of the two options below. 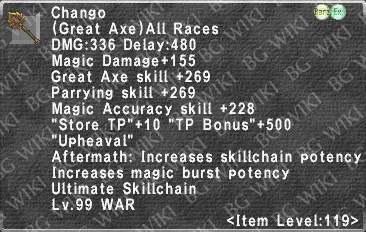 - The Aeonic Great Axe that unlocks the ability to perform Ultimate Skillchains. This will require grouping with others for some more difficult content, which might even require you leveling additional jobs to partake in. If you have access to the help, a great weapon to work on as an upgrade from your Lycurgos. 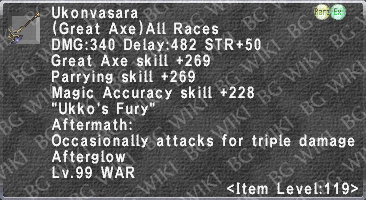 - The Empyrean Great Axe is a white damage beast. Making this weapon will require accumulating more resources over a large number of stages, but a person with fewer connections with others could work on this more easily over time.

The other Great Axe Ultimate Weapons 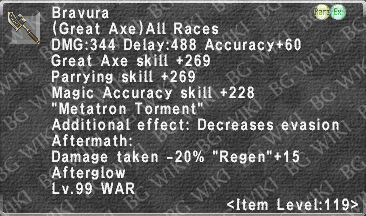 - Most of the Relic Weapons are lagging behind at the time of this writing. Hopefully something is done with them eventually. 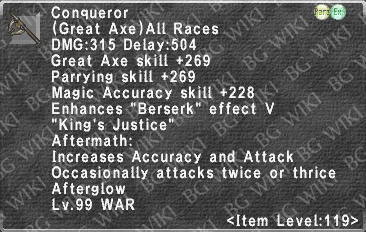 - The Mythic Great Axe. Not worth the effort at this time either.

Great Swords were once the "me too!" Bandwagon Warriors' weapon of choice for zerging, but Resolution has been outshined by a new hotness. Good.

Regardless, Resolution is still a perfectly fine weapon skill and Shockwave enables a Warrior to land Sleep on a group of mobs themselves. Useful for some scenarios. 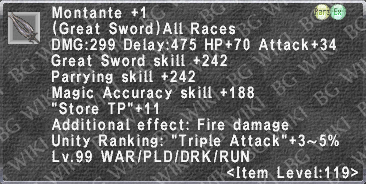 - Obtained from the Unity Concord NM Sarama, which you'll need some help with. A fantastic Great Sword that saw a life extension thanks to augmenting through Lustreless Wings. If you already have this one from earlier, you may consider sticking with it augmented rather than making the next option. 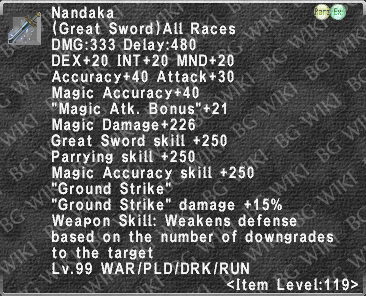 - The final form of the Ambuscade Great Sword. I'd imagine these days, most Warriors will just start with this line of Great Swords when expanding their armory.

Sword-and-board Warrior has come back in style -- it's not just for newbies in the Dunes anymore!

Thanks to Warrior's Fencer trait and some relatively newer gear, Savage Blade is the new defacto Warrior weaponskill of choice for mindless zerging with others. Swords should only be used when skillchaining doesn't matter. 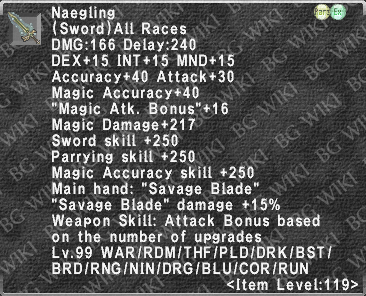 - The final form of the Ambuscade Sword. As of the time of this writing, this is basically a must have for Warriors at this point and really the only sword you need for now. The Kaja Sword and earlier stages of the weapon will do fine as you work towards it, but the boost to Savage Blade doesn't kick in until the Kaja Sword. 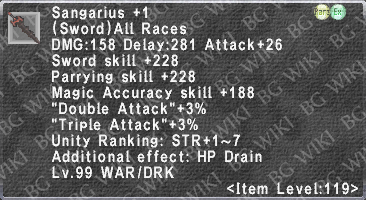 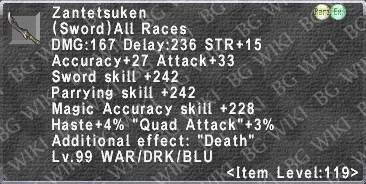 - The better version of an augmented Sangarius +1. Your mileage may vary on droprate as it obtained as a chance droprate from Odin Prime High Tier Mission Battle, via a Stygian Pact phantom gem.

Remember Axes? Warrior can use them, and use them well! They don't get a lot of press these days, though. 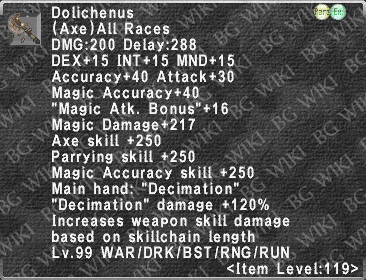 - The final form of the Ambuscade Axe. Like the other Ambuscade weapons, you get a boost to a weapon skill starting at the Kaja stage. Some very respectable numbers can be seen from Decimation using it.

- A relic (pun not intended) of the pre-Adoulin, level cap 99 days courtesy of the Trial of the Magians upgrading & augmenting system. Where it fall short in base damage and accuracy, if you follow the correct upgrade path, you gain a massive TP Bonus +1,000. Essentially closing the gap between a single wield Fencer build and a Dual Wield build. 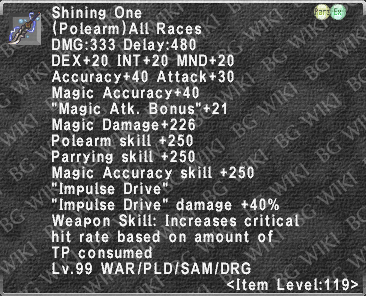 - The final form of the Ambuscade Polearm. Like the other Ambuscade weapons, you get a boost to a weaponskill starting at the Kaja stage. You'll want one of these in your toolkit, especially if doing Odyssey.

Clubs provide a source of Blunt damage for Warriors. 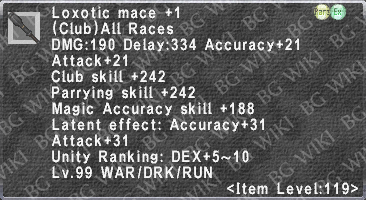 - Obtained from the Unity Concord NM Grand Grenade. This can be augmented through the Odyssey item Lustreless Hides. Fully Augmented, Loxotic Mace +1 sports an additional DMG +33, Accuracy & Magic Accuracy +40, and Weapon Skill Damage +10%. With this Mace, you're capable of putting out some really nice numbers through Judgement or Black Halo. Part of a Warrior's expected toolkit for Odyssey, allowing you to beat down the Undead and other slashing resistant monsters. When /DRG and doing any Slashing-resistant monsters, just swap from Naegling to this.

Sometimes Provoke is down or should be saved. Sometimes you need the distance so you can thin the mob herd a little. Sometimes you want to pull a mob while waiting for buffs to finish being setup.

- An under-appreciated hero. Darts are cheap and fast, but what makes them great is you can swap to a Dart from any other ammo slot piece and not lose TP. There's really no reason to not carry a stack of these and be able to use them when the need arises.

- Necessary to utilize the merited Tomahawk ability. Don't leave them in the Mog House and feel like a goober the rare times you can utilize it.

Savage Blade is the current weaponskill of choice for pure zerging with other melee when skillchaining doesn't matter or might be detrimental (like when skillchain elements can heal the target). This is largely in part thanks to the overpowered Ambuscade Sword weapon, with Naegling being it's final form. Most front-line jobs can spam Savage Blade without a care currently and contribute fairly well. Warrior, with access to it's job abilities and SP, does this very well.

A quick note on some recommended trusts for leveling and general purpose solo play. When you are by yourself, you should be doing enough damage that most of the time you will be the de-facto tank. So we want to lean heavily on healers and support trusts that boost your DPS and keep you alive. For standard gameplay, the following easily obtainable trusts are recommended:

Occasionally, your battle target may be a mob that does a devastating single-target TP move (instant KO, Charm, etc.). That's when you want to call a tank trust and let them eat them, holding back your DPS enough for them to keep hate most of the time.