Were you looking for Magic Damage (Statistic) or Cure Formula or Calculating Blue Magic Damage? 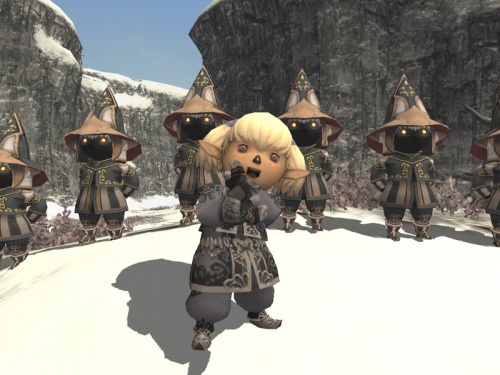 Damage Dealt is calculated by multiplying the following terms in order (see above). After each multiplication step, the product is floored to the next lowest integer before continuing to the next multiplier. Each term after D starts with a base of 1.0 and is increased or decreased by caster and target stats and attributes as well as other effects.

Affinity adds damage in a separate multiplier term. When affinity is present, it starts at a base of 5% ("Affinity +0"), with 5% additional for each affinity level. Affinity from equipment can only be gained from elemental staves created through Trial of the Magians and a few other items (Weatherspoon Ring).

Affinity in the form of element-specific attack power from Atma or Atmacite is additive with this term.

Note that for spells with multiple targets, the resist value for each target is determined independently.

When a monster's resistance rank to an element is 50% or lower, an additional forced resist of 1/2 = 50% is added onto the previous resist, calculated multiplicatively.

Also known as the "Nuke Wall", there is a 60% penalty in identical elemental damage taken for 5 seconds after it is first dealt. This is a common issue during Magic Bursts, and guaranteed to happen with multiple casters.

Day & Weather is calculated with a base of 1.0 and additional values added or subtracted depending on the current day of the week, weather, or certain equipment pieces (E.g. Elemental Obis).
Note that in most cases, the day or weather effect must "proc" for the bonus to be received - this is a random occurrence when the day or weather matches the spell's element (bonus damage) or is ascendant/opposed to the spell's element (reduced damage). This proc may be forced via wearing an Elemental Obi.

The Magic Burst multiplier is dependent on the number weapon skills which resulted in the formation of the Skillchain which was magic bursted. This starts at a base of 1.25 for a two-stage Skillchain, with an additional 0.1 for every additional stage.

Magic Burst Bonus is calculated as:

The overall term caps at 1.4 prior to the addition of effects from the Magic Burst Bonus trait, for an absolute cap of 1.53 maximum at level 97 or higher BLM.

The MAB/MDB factor combines the effects of the caster's MAB and the target's MDB.

The caster MAB multiplier term is calculated as follows:


The target MDB divisor term is calculated as follows:

The MAB/MDB term is simply the caster MAB value divided by the target MDB value:

Certain specific enemies or families of monsters have traits which cause them to take more or less magical damage on a percentage basis, generally referred to as the "Magic Damage Taken" statistic. Values for Magic Damage Taken are determined as a fraction of 256.

The base value of TMDA is 1 (256/256) and this value is adjusted according to the fractional values for specific monster types or monster families, and other buffing effects the monster might have.

The effects of Shell Spells active on targets are included in the Magic Damage Taken term.

Other potency multipliers are applied individually to the overall equation, with flooring after each multiplication step. Example multipliers include:

The following example is damage calculation for the spell Stone II.

The following example is damage calculation for the spell Thundaja cast on three targets.

The following example is damage calculation for the spell Freeze II magic bursted on one target after a 2-step skillchain.