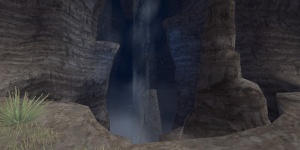 The requirements to participate in expeditions are: 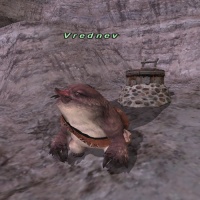 If a player fulfills the prerequisites, speaking to the NPC Burrow Investigator in Upper Jeuno (I-8) will allow players to begin participation and start the timer on the generation of Moblin pheromone sacks. This NPC will also transport players to the burrows entry locations at no cost by choosing the option "Head to the burrows."

In order to choose a Meeble Burrows expedition and record completion progress, players in the group must utilize a grimoire for recording progress. While all grimoires serve the same purpose and have no unique aspects, five grimoires are available, and players may use different grimoires for different missions if they wish to record expedition progress separately. Purchasable grimoires can be bought from either the Burrow Investigator or Burrow Researcher for 2,000 gil or 200 Research Marks.

Note that grimoires can only record progress from one entry area (Sauromugue or Batallia) at a time.

Once the Grimoire page and Moblin pheromone sack have been obtained, the Burrow Researcher takes on additional functions:

Reference Meeble Burrows/Progression for further clarification on progression, including an illustrative animation showing how clearing expeditions unlocks other expeditions.

For level 5 expeditions, all party members must meet the prerequisites by having completed or purchased the completion status for the first four expeditions of that course and choose to participate with the Burrow Researcher.

After choosing an expedition, the leader should speak to the nearby entry meeble to enter the burrows. All party members will be brought into the area simultaneously.

Upon entry into an expedition, the Moblin pheromone sack will be expended immediately. Unlike other similar events, if a player disconnects during entry, when they reconnect to the game, the Moblin pheromone sack will be expended and they will be transported into the expedition immediately. Once inside the expedition area, the goals will be displayed for all players, and a Speleological Handbook will be present allowing players to re-check the goals of the current expedition as well as to check any boons currently being bestowed to them by their party leader's grimoire based on past progress (Note: for level 5 expeditions, since all grimoires are consumed, all boons from each player's grimoire will be given to every player in the party).

There has been a recurring glitch with Meeble Burrows content which occasionally causes players to be immediately ejected from the area upon entry, and expend the Moblin pheromone sack in the process. This bug has been patched repeatedly and is no longer an issue, but if it does occur, players who are ejected from an expedition will be reimbursed automatically with a new Moblin pheromone sack and will not lose grimoire progress (for level 5 expeditions). Companions who were not ejected will also automatically receive a new Moblin pheromone sack (and not lose grimoire progress) as long as they exit the run in less than three minutes without completing any of the run's goals.[1] [2] [3] [4] [5]

Each expedition has three goals of increasing difficulty and completing higher goals within an expedition yields more Research Marks. Progress towards cumulative goals will be kept track of in the chat log. For example, after each defeated monster where an expedition goal is to defeat monsters, the total number of defeated targets will be displayed. As each goal is completed, it will be announced in the chat log for all participants.

During many expeditions, players will find a Soothing Strongbox which restores the HP and MP of all party members in range.

Note that aggressive monsters in Meeble Burrows are true aggro, so Sneak and Invisible (Status) will have no effect.

Whenever an expedition is successfully completed, a status boon corresponding to that expedition will be added to the player's grimoire. For expeditions #1-#4, the leader's grimoire will determine which boons are present on party members. For #5, all boons on each player's traded grimoire will be given to every player. If a player already has a particular status boon recorded to their grimoire and successfully repeats the expedition that rewards that boon, the level of that status boon will be increased by one, up to a maximum of level 3 (the levels of Auto-Reraise, "Bonus to spoils", and "Treasure Hunter" cannot be increased past level 1). The level of the status boon is only dependent on the number of completions, not the goals completed.

Upon entering the zone, players will be given the temporary item Hiatus Whistle which can be used to exit the user from the area at any time during the run. When any goal is completed players will receive a temporary item Terminus Whistle which can be used to end the expedition and remove the entire party from the area, although they may choose to continue the expedition to attempt to complete more goals.
This code and information has been copied verbatim from the BlueGartr Wiki.

To end an expedition successfully, players must use one of the two whistles to exit the area; the completion of goals and award of Research Marks are recorded to your grimoire page as soon as a whistle is used, just before exiting the zone. Timing out or leaving in any other manner (Warping, home pointing, etc.) will count as failure. After speaking with the Burrow Researcher to retrieve your Grimoire, the status boon will be recorded and you will receive the associated Research Marks reward in return for the grimoire page. Note that the final Moblin pheromone sack will not accumulate if you do not retrieve your Grimoire from the Burrow Researcher after completing an expedition.

In addition to items which may drop from enemies defeated within Meeble Burrows, players are also rewarded with Research Marks at the end of any successful expedition. Research Marks can be redeemed for a variety of items and unique equipment at either the Burrow Researcher or Burrow Investigator NPCs.

The number of Research Marks rewarded to a group of players at the end of an expedition can vary significantly from expedition to expedition. Generally speaking, expeditions from higher courses are worth more research marks, but some individual expeditions may differ. The correct amounts are listed on the expedition pages.

Upon completing an expedition and using one of the two whistles to exit, in addition to Research Marks, Wizened Worms will be rewarded to each player. The number and type of worms rewarded are random with Wizened Tunnel Worm the most common, Wizened Morion Worm less common, and Wizened Phantom Worm the least common of all. A quantity of wizened worms can be given to the meebles Utrig or Sokrov for a random item from a set possible list.

See Meeble Burrows/Rewards for a detailed list of equipment rewards, including stats and acquisition methods, or reference the rewards tables on Meeble Burrows expedition pages:

The Mundus Shield was available for the first time during this campaign. Items with already rare appearance rate such as the Dervish Sword (and thus its replacement item Arise (Scroll)) might never be seen.

The following 76 pages are in this category, out of 76 total.