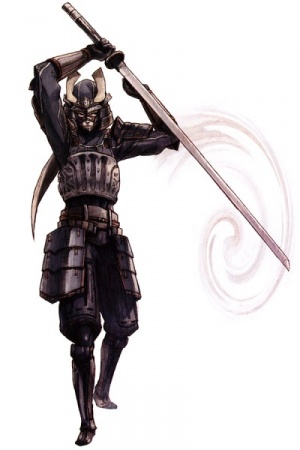 Available after completing the quest Forge Your Destiny, the Samurai (SAM) job focuses on the mastery of weapon skills and skillchains. Samurai excel at the use of Weapon Skills due to their ability to rapidly gain Tactical Points and use them to their advantage. Their mainstay weapon is the Great Katana, but they also have respectable skill in Polearms and Archery.

"Take this mumeito. This blade was forged fer ya. Pledge your life t'her an' she won't let ya down." - Gilgamesh

Warriors from the East. Demon Killers. Samurai are experts in wielding the Great Katana and manipulating Tactical Points, allowing the player to unleash a flurry of skills on their enemies quicker than any other class in Vana'diel. A Samurai's primary and most effective role is dealing high frequencies of damage. Samurai's versatility lies in the ability to output high bursts of damage with various abilities and traits that enable them to use Weapon Skills more frequently than any other job.

The following table only lists the Job Traits of a level 99 Samurai and their effects at that level alphabetically. For more information about these Job Traits (e. g. its tiers, if any and the respective level the ability/tier is granted), are linked to their BG Wiki pages.

Decreases the recast time of one-hour abilities by 15 minutes.

Samurai job abilities revolve two different concepts: Primarily, there are two major abilities that affect the samurai's damage output or survival -- Hasso and Seigan respectively. These two share a timer, so only one may be active at a time.

The rest of your abilities are then focused on increasing your offensive attributes.

Samurai's group I merits are recommended to be:

Note: STP is a must. SAM relies heavily on large amounts of STP to have ideal "x-hit" builds. Other alternatives may seem attractive, but aren't as potentially beneficial. With the currently available gear, Zanshin Attack rate is considered your priority. Alternatively, could put some points into meditate recast.

The group II merits are recommended to be:

Note: Overwhelm is a must. That said, Ikishoten can allow some leeway for Shikikoyo and Blade Bash. Shikikoyo's effect can be useful for pre-fight prep for your fellow DD, Blade Bash can potentially inflict plague and/or stun. It's not a bad idea to have one point on each, but not necessary. Up to you.

Based on your play style and/or the Content you're participating in, along with what REMA you're using, Support Jobs may vary:

Samurai, generally, will exclusively use Great Katana, and occasionally, Polearm. In terms of options, players will generally seek out Ultimate Weapons (or as they're more commonly known, REMA). This is a list of potential options.

note: these are opinions - require community input for verification

What about other GKs?

While REMA is arguably "the ideal", there are various weapons leading up to these that will assist you in the process of gearing up Samurai.

Note: Don't sweat it if you don't get "perfect" augments - you can always keep trying later on. These are just guidelines.

SE decided polearms are back in business.
Ambuscade weapons shook the meta a fair bit, making them more viable for content with appropriate gear.
With the release of Odyssey, multiple damage types are crucial. As such, these are your options.

There are, perhaps, other options... but realistically, they don't matter (Quint Spear, I miss you).

Samurai's Artifact, Relic and Empyrean armors are particularly key towards different facets of your abilities. These pieces serve different purposes and some of them are—at most—macro pieces.
Priorities and reasoning will be included with each piece.

These sets are by no means set in stone. +1's (or +2's in ambuscade equipment's case) are not a hard requirement in any of these—but as always, they're welcome advantages. The "gearing up" process establishes a baseline set with low accuracy requirements but sufficient Store TP to maintain an x-hit build—however—these sets are built around a typical party composition (bard, geo), but excluding SAM roll for any extra cushion in regards to TP. TP overflow is a good thing anyway.

The sets listed above, as mentioned earlier, are intended to be for scenarios where you don't require accuracy outside of what your buffs and food give you. For the things that do need more accuracy, then these tiered sets start filling in.

It's important to note that the accuracy listed on these sets is prior to any buffs (e.g. Hasso, cheers, food, etc). To determine the appropriate level of accuracy you need to jump to, it's important you understand what buffs you'll be receiving relative to your party composition and the estimated required accuracy of your target.

For more info, verify the accuracy cheat sheet further down this guide.

In short, the sets for when you don't want to die to a single TP move or magic spell, or avoid annoying status ailments.

Most weaponskills for Samurai share the same set as you would gear for Fudo or Shoha. The WS sets for the "gearing up" stage can apply to all WS. I'll separate the "max" level into a "shoha" and a "fudo" set for those looking to get that top deeps.
For clarification, Nyame isn't included in any of these sets. You're limited to 1 set of armor, and the path you choose drastically alters your use-case for them. Where you want to make those changes is, first and foremost, YOUR decision. Gauge if it's worth replacing any gear vs. how accessible augmenting the gear is.

Now, it's important to understand that the sets listed above are a functional set for your primary physical weaponskills - e.g. Fudo, Kasha, Gekko, Yukikaze.
As for your other options, we have the following:

No SAM is complete without some Skillchain Knowledge.
SCing is important due to all the extra damage it provides, much more than your weapon skill itself will do. Multistepping, or creating multiple skillchains off of previous skillchains increases the damage of a skillchain more and more each step. The window to create another step becomes shorter and shorter after each. Initially the window for a skillchain starts at 10 seconds between WSs to count. Each step reduces that time down by about 2 seconds until reaching 3 seconds.
Overall thanks to massive amount of Store TP and various ways to gain it, it is easy to multistep by yourself.

Empyrean and Relic WSs are the only WSs with a level 3 (light or dark) property. These may be used to create light and dark with themselves.

You may make a double light or dark SC, but this must be done with a level 2 → 3 resulting in light or dark and then a relic or empyrean level 3 WS following it to create the second light or dark.