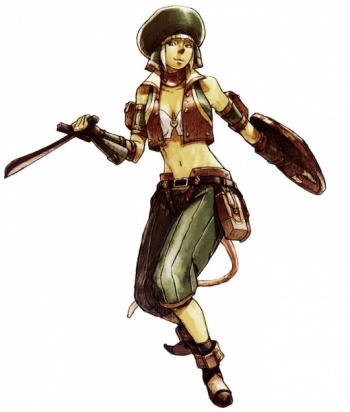 Thief is a non-buff support damage dealer in FFXI. It will largely be played as a damage dealer and specifically a skillchain closer. Thief also is capable of placing hate on a player of their choosing. As well as stealing hate from other players; to help maintain control of battle.

The two most common roles is that of damage over time by dual wielding daggers and gathering rare items due to the Treasure Hunter ability.

Your high damage will be from using the tried and true Sneak Attack and Trick Attack. In the old days you would stack them and use both at the same time. Nowadays it's better to use each with a weapon skill since you can build TP quickly and help the tank maintain hate.

Look, Treasure Hunter is not some mystery.

This is your highest damage option for sub jobs if your attack isn't capped due to Berserk and Warcry. Aggressor is not the worst thing to have either. However, it lacks Invisible, Sneak, damage mitigation, or healing, and as such is only viable when you have reliable healing or are fighting a monster with no Area of affect moves/spells/abilities.

This is a more useful sub than you might think, and not just for niche situations. The Attack Bonus trait is the highest you will get and Last Resort will be identical to Berserk for a Thief. Since this guide clearly only advocates for Wanton Disregard, you also get Soul Eater to eat away at 8.5%-7% of your HP a swing. Whew baby! Otherwise, if you go from needing attack to capping it. Then the Damage Limit+ trait is actually a solid boost.
As for niche situations, Poisonga is really useful for applying Treasure Hunter to a field of monsters in an event such as Omen or Divergence. Especially since it gets resisted most of the time against anything foe of consequence. Stun isn't the worst thing, and allows for slight enmity control of stray foes.

Enmity shedding with High Jump aside, the WS Damage Boost trait is what makes this the best sub for DDing while attack capped. The Conserve TP isn't terrible either given that Double Attack as a trait is weak for THF. The Accuracy Bonus will certainly come into play too. Despite lacking an ability to raise your attack when needed. The sub offers you a lot without lowering your defense further. Once you gain Super Jump this sub synergizes nicely with Collaborator, Accomplice, and Sneak Attack.

This sub offers sufficient utility, as well as healing should you be doing an event where trusts are not allowed or there are some shall we say— issues.
Dancer provides Sneak and Invisible, and eventually the most important bonus from any sub, Chocobo Jig. Haste Samba is "aggressively medium", while lacking buffs, but a Box Step right before you go to WS is a nice contribution to the group. Skillchain Bonus is generally underrated, and can really make the sub worthwhile in the right hands. Speaking of which: Subtle Blow.
This is one of the main subs for "soloing" as a Thf. While leveling, the time to start using Dancer as your Support is at 40 so you have access to Dual Wield.

Sometimes you just need damage or TP move mitigation. This sub also offers sneak and invisible.
Since Thief doesn't get native Dual Wield until Level 83, subbing Ninja starting at Level 20 is the best option until you reach 40. You may then use Dancer as your support.
From 50+ /NIN will still provide another tier of Dual wield until 90/98 when a third is granted and then natively gained.

This is the defensive subjob of choice if shadows aren't viable, which is a lot of endgame content. Magic defense bonus, Runes, Vallation/Valiance are sweet for magical mitigation. Runes will offer you 58 resistance of an element of your choice.
Thief (as well as Dancer) may also push upwards of a 20% parry rate with this sub, Turms Leggings +1, and a parry +5 augment on an Ambuscade cape. Pretty neat.

There are two main sets a THF needs. The first major one is the TP set in which you first want to cap your delay reduction. The next are your WS sets, and obviously you should have some DT sets as a third priority if you want to be valued. Woah, lets cool it on that sick elitist rhetoric, right?
Well, if you didn't care then you wouldn't be reading any advice on being better. So, dont be that guy, and make some defensive sets for physical, magical, magic evasion, evasion, etc. As long as you cap Damage Taken you can always go back later and min max out some sets, but have something worthwhile to resort to. Fortunately, there are sets below for you!

So your TP set on THF generally requires 26% equipment haste, 44% magic haste, and a certain amount of dual wield based on the buffs you have. You can go to Attack Speed for the more intricate numbers. If you're fully buffed though, you need DW+11, or DW+6 if you've acquired 550 JP.

After you've reached that (or very close) you need to stack accuracy until you are around the accuracy cap for the content you're doing. This is going to vary, but sometimes other players or pages on the wiki will explain the accuracy required. Parsing with third party tools is the best way to get this right otherwise.

Next step is to stack Triple Attack and Store TP. I'd value +2~2.5 STP similar to 1% Triple Attack. This comparison is going to change based on your gear and buffs, as the more TA you get, the more STP helps, and vice versa, so try for a general balance around that ratio.

If you can't decide between two pieces after all of that is considered, choose the one with more magic evasion or defensive stats, as you can't deal any damage while dead.

For weapon skills you largely need one type of gear, which is to stack DEX and Weapon skill damage+. Rudra's Storm and Mandalic Stab are our two strongest WS and both scale nicely with just those two main stats. Evisceration needs crit damage and then crit rate gear, as well as some more Accuracy+ to consider
For Exenterator, just stack AGI/ACC/ATT as it doesn't crit and doesn't scale well with WSD. Rudra's is your bread and butter WS, strong both stacked and unstacked, but you need attack buffs to really pump out any cool numbers. In a scenario where you have to deal without attack buffs, Mandalic, which has a native attack boost to it, can outpace Rudra's. This is true in general, but especially is with an augmented mythic.

If you are just a mule/new THF looking to be better than worthless. Toss on your Tauret/Shijo and spam Evisceration while SCing with SA or TA Rudras.