In order to participate in Voidwatch, you must satisfy the following conditions:

In order to initiate a Voidwatch battle, the appropriate stratum abyssite on the initiating player must be advanced at least as high as the tier associated with the battle (see the tables below under "Voidwatch Ops"). Only the one player initiating the battle needs to fulfill this requirement. Higher tier stratum abyssites are obtained either by upgrading at an Atmacite Refiner or completing certain Voidwatch Quests. 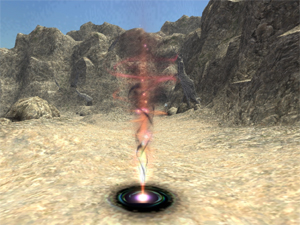 Planar rifts are gateways from an alternate reality through which Voidwatch monsters are manifest.

Players must initially speak to a Voidwatch Officer in order to obtain a Stratum Abyssite key item. Each key item needs to be acquired only once.

In order to upgrade each paths abyssite, see the link for requiered quests and subquests..

The Voidwatch Officer NPC will also provide the player with voidstones on request. A voidstone is required for each participating player in the battle who wishes to receive treasure or key items at the end (within Provenance, Kupofried's corundum are used instead of voidstones; however, they are required to participate in the battle). Players may still participate in battles for base EXP, base cruor, and stratum abyssite upgrades without possessing a voidstone, but will not be eligible for treasure, key items, or alignment-enhanced EXP or cruor rewards. Voidstones regenerate over time (one per 20 hours, or as low as 12 hours with two Periapts of Exploration) and an unlimited amount can be accumulated on the Voidwatch Officer once the player initially speaks with one. Voidstones can also be obtained by trading Voiddust, which can be obtained from Voidwatch Purveyors or Grounds of Valor caskets, to a Voidwatch Officer.

As of the April 5th, 2016 Version Update, players can now use voidstones directly from their stock instead of refilling into their inventory. You must change this setting in order to take advantage of it. To set this option, speak with any Voidwatch Officer and select “Ask a bunch of questions.” Next, choose “Voidstone consumption” from the list of responses. When prompted, select “stock.”

Once you are at the proper zone, you can begin the battle by examining one of three Planar Rifts. Neither the strength of your opponent nor the prizes for defeating it will be affected by your choice of rift. Prior to engaging in battle, a Voidwatch monster may be weakened by utilizing Void clusters. After purchasing a Phase Displacer from Ardrick in Jugner Forest (I-8), trade it to any Planar Rift to receive a Void cluster. Only the player starting the battle will utilize void clusters, and up to to five can be used in one battle to weaken the enemy. Utilizing all five clusters will very significantly weaken the enemy, but the effect of even one will be noticeable.

Once the battle has begun, a voidstone, if available, will be consumed for each person who participates in the battle. HP and MP will be completely restored to all members in the alliance upon initiating the battle. Players who possess certain Periapts will receive powerful temporary items at the start of the battle. 30 minutes are allotted to defeat the enemy before it despawns and the battle ends in failure. If a battle is failed or you choose not to examine the Riftworn Pyxis following a battle, your voidstone will not be used up and will be carried over to the next battle unless you are the player who starts the next battle (a voidstone of the player who starts the battle will always be consumed). Zilart battles will involve multiple enemies; only the primary target needs to be defeated to win the battle.

Upon defeating the enemy, a Riftworn Pyxis will appear for three minutes. Every participant in the battle may examine it to receive their individual rewards (which will differ from the rewards received by other players). See After the Battle for more details.

There are several benefits to upgrading abyssite:

Whether or not you have upgraded abyssites, you will still be able to obtain rewards from any fights you can participate in as long as you have available voidstones. 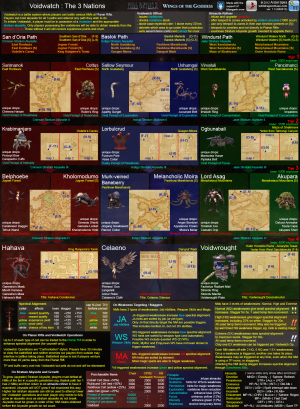 * Must be in possession of at least one temporary item Periapt to have access to temporary items. Extreme vulnerabilities will additionally give a Revitalizer to the player who triggers it if they have a Periapt of recompense.
** If the player who staggers is in possession of periapt(s) of concord, job ability and weapon skill weaknesses will receive an alignment bonus. Similarly, periapt(s) of catalysis will yield bonus alignment on magic weaknesses. Low weaknesses will be increased by 5% per periapt, higher weaknesses will be increased by 10-20% on each light per periapt.
^ The higher alignment boosts are received when the weakness stagger is hit during or just after the mob is readying a TP move or casting a spell.

While an enemy is staggered, a window opens during which the enemy is frozen and Synchronic Blitz may be performed. 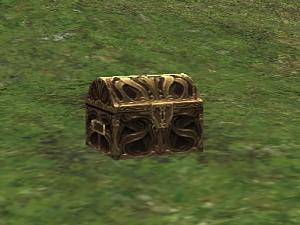 Rewards for completing Voidwatch battles are obtained separately by each player from a Riftworn Pyxis following the battle.

Once the battle is successfully completed, a Riftworn Pyxis will appear at the position of the Planar Rift where the battle was initiated. Each player must click on the pyxis to receive his or her reward. The Pyxis will remain for three minutes or until all participants obtain or relinquish all of their rewards, whichever comes first, at which time it will despawn and be replaced by the Planar Rift shortly thereafter. In Provenance, periapts and atmacites are obtained immediately upon battle completion and item rewards are obtained from a Glimmering Trove rather than a Riftworn Pyxis. As players cannot participate in a Provenance battle without expending the requisite key items, items are always obtained.

A host of varied unique equipment is available from the Voidwatch battles, with each battle offering at least one item available nowhere else. This includes (but is not limited to) the items below:

Among the Voidwatch-specific equipment are three new sets of armor obtained from the tier IV, V, and VI foes of the white Voidwatch path, offering unique statistics and set bonuses:

Hands and legs abjurations from the new Abjuration armor sets are obtained exclusively from the hyacinth and amber Voidwatch paths, as well as Provenance radiance battles.

Several powerful weapons and armor pieces forged with crystal can be obtained exclusively from the final battle of Provenance against Provenance Watcher.

The rarest and most unique items obtainable from Voidwatch are the Pulse Panoplia: weapons and armor named for their visible pulsing aura. If one of these unique pieces of equipment is obtained in the riftworn pyxis (denoted by a star next to the name), but the player does not desire to obtain that piece or already has it in possession, it may be converted into a Pulse Cell by selecting the "Obtain as pulse cell" option. Pulse Cells may be traded and sold (including the auction house). Obtaining five pulse cells of the same type and trading them to Ardrick in Jugner Forest will allow the player to obtain the associated equipment. Note: you must have obtained the title associated with defeating the monster that drops the desired equipment in order to receive the equipment from Pulse Cells. Titles can only be obtained if the associated stratum abyssite is at or beyond the tier associated with the NM when the NM is defeated.

Players may receive a Periapt from a successful Voidwatch battle, or by purchasing them with cruor from a Voidwatch Officer. Periapts bestow various enhancements during fights, including increasing spectral alignments and reducing voidstone regeneration time.

Unlike Abyssea, some Voidwatch Notorious Monsters can require multiple parties. In general, 12 skilled players on the right jobs should be sufficient for all but the most difficult Voidwatch NMs. However, in order to build lights and increase the chance of obtaining better rewards, a large and varied setup of players is useful. With that in mind, here is a bare-bones strategy that will work for most Voidwatch NMs:

This category has the following 7 subcategories, out of 7 total.