Were you looking for Sortie Rewards? 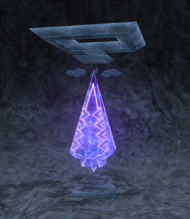 Upon first entry, you will have access to Sector A only. Within Sortie, meeting certain Hidden Objectives rewards

Temporary Items which allow access to additional parts of the map.

Gallimaufry is the primary currency of Sortie. It is earned within by vanquishing monsters, opening treasure chests, and defeating NMs. It may be spent with Ruspix to commission Reforged Empyrean Armor +2 and Reforged Empyrean Armor +3 as well as to purchase Ra'Kaznar Sapphires, Ra'Kaznar Starstones and Old Cases. It is also used to purchase the first phase of Prime Weapons.

Gallimaufry from regular enemies is earned via the formula (level - 109) * 3. Minor NMs grant 5x what their level would suggest.

The maximum amount of Gallimaufry that can be held at once is 100,000.

In each area of sortie there will be a minor and major NM.

The following 52 pages are in this category, out of 52 total.