The Beastmen must prepare themselves before attacking Al Zahbi. Their progress can be viewed on the besieged map. There are four stages the Beastmen forces will cycle through: Training, Preparing, Advancing, and Attacking. Their process is reset on Server Maintenance.

Server Maintenance causes battles to not take place for a lengthy period of time.

When the entirety of the enemy forces have invaded Al Zahbi, the battle will begin. A cutscene will play for all those located in the area. The cutscene calls mercenaries to arms, introduces the Beastmen, randomly presents a Serpent General or the Immortals if they are all being held Prisoner, and reveals how many seals are placed on the Hall of Binding. If the Beastmen Leader is present, they will be featured in the cutscene. Players will be randomly moved to a location, near one of the five Serpent Generals. Temporary Items will then be distributed. 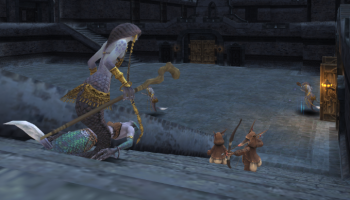 During Besieged battles, the beastmen have a chance of capturing certain NPCs from the zone before they retreat. Whether or not they capture an NPC is a lottery basis if the NPC is defeated during Besieged.

When an NPC is captured, their specific function is not available in Al Zahbi until they are freed and return to town. In addition, certain Temporary Items provided during Besieged are not given to players if the associated items are tied to that NPC.

The Serpent Generals also have a chance at being captured when they are KO'd during battle. It is a lottery chance whether or not they are captured or just reappear in town. If they are captured, their subordinate NPCs are also taken away from battle until they return. If a general is captured at the start of a new battle, the defensive force is at a large disadvantage.

Only certain NPCs are able to be captured. Below is a list of potential POWs.

*: Shepherd's Drink is only provided to BST / DRG / SMN / PUP, and Drachenessence is only given to DRGs.